From January to August 2015 I was working on a project, let's call it "Netty Betty" or perhaps more fittingly it should be called my "nête noire"

It was a project of such magnitude that I cleared the dining table.

Netty Betty took over Boogie Nights gradually at first. It started with the saloon table. Then the sacred table of charts became a storage shelf for reels of webbing and velcro.
Once that was full, the sofa became a functional storage bench, with just enough space remaining to be seated for breakfast. Only room for one though ay.
The galley was lined with hooks, and from the hooks hung bundle upon bundle of raw edged netting. They were coded and batched.
Then the carpets were taken up and removed. As the weather improved, work expanded into the cockpit.

The days of working in my parents factory on assembly paid off with a systematic approach to the almost overwhelming amount of items on the production line.

For this particular nête noire I was buyer, pattern cutter, seamstress, production manager, assembly line and fitter.
For twelve global racing boats I had to fit each one with a full set of interior nets. That's 62 per boat. Sixty two. Each net takes approximately 30-40 minutes each, when I take into account the buying, cutting, bundling up, sewing, assembling, cycling with a trailer full of nets and fitting them into the boats. Think about that for a moment.

It was all very quiet in January and February, I could assemble a set, then go fit them. But gradually as time pressed on, more and more crews were starting their training and the skippers had been selected. This meant that the fitting process was a carefully coordinated affair or watching the AIS tracker to see where each boat was. When I saw it heading back to Portsmouth, I'd ready myself with a trailer full of netting and my cordless drill for action. Unless of course they were arriving back in the middle of the night or while I was at work.

Yes, did I mention I also work full time too?

With all of this going on, the thoughts of going sailing had been carefully parked. You know, the carefully parked car in the far corner of the carpark. The one that has started going green around the windows. The one that noone knows if it belongs to anyone. The one that remarkably is still taxed and insured, despite the tyres looking a bit low and the windscreen full of bird shit from overhanging trees.
Well, that car represents my summer sailing hopes, dreams and plans.

A close personal friend, whom I shall call Mr Dee for the purpose of this blog, had signalled interest on joining Boogie Nights for a two week holiday toward the end of summer. This was the subject of many conversations. Destinations had been discussed. Plans that involved anchoring and hammocks had been mooted.

Before then though, the whole business of Netty Betty had to be taken care of. Everytime I called around to fit the next set, the now burgeoning numbers of crew and the skippers were asking, "could you make us something for this..." [pointing to a "this"] to which I would hear sounds coming out of my mouth like "sure, I'll see what I can do..."
I'd be having a word with myself while hanging upside down fitting the next batch of nets, and so it became almost a fight club of beating myself up and taking on more and more work while the moss covered dreams of holidays sailing in the sun sat sadly neglected.


A set of images from the job can be seen here: MantaRay racing solutions

Anyway, after several all-nighters to get the work done, including it cannot be denied, some quite funny car park based drinking shenanigans with some of the crews, the boats left for their start line in London and I was left waving them off on their global adventure. 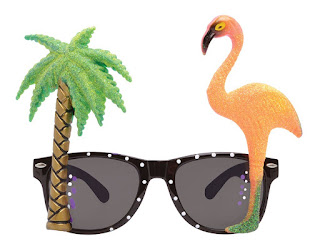 Don't even think about trying to stop me. I took the new figure head out and attached her to the pulpit in readiness. Disco Barbie

"What's that Mr Dee? You need to delay the start by a day? Ok, but we're going to miss the weather window. Best hurry up and get here.
Yes, ok you can do the provisioning if it helps you feel like you've contributed in some way.
Get non spicy easy to digest food, preferably vegetarian as far as possible."

What arrived was not quite what I had in mind.

Between smart price bacon, spicy Indian chicken bites and smart price cheese and onion slices, the vegetarian options or ethically sound meat purchases were thin on the ground.
I'm not exactly a 100% vegetarian, I'm one of those modern "meat reducers" whose main intent is to eat healthily and lessen my impact on the planet through reduction in demand for high impact agriculture.
My philosophy on meat is that it should be respected, it should be little and infrequent and the absolute very best you can possibly buy, ideally directly from a local producer.
Smart price bacon is a sackable offence. It's disrespectful to all things living and dead.

I put on my best poker face and tried to pretend that it didn't matter as I loaded the offending items into the fridge.

Setting off a day later than my initial passage plan meant the weather window was closing come departure time, first thing on Monday.
It wasn't just raining, it was raining sideways and sometimes upwards.
The plan to get to Weymouth for cheap (free) moorings while we waited for the forecast gale to pass was looking like a faint but feasible possibility.

However, it was soon apparent as we headed round the south side of the Isle of Wight, that Poole would be the first stop.


"It was fairly sporty but nothing particularly monstrous, Mr Dee being relatively new to sailing gradually drained of colour and had to hurl abuse toward Neptune over the side."


The only minor glitch in this maneuver was one that I hadn't accounted for when I had fitted small safety nets for the dog adjacent to the coaming. They certainly do prevent things from heading over the side and rather deflect them in random directions. You've heard of scatter cushions no doubt? Well, these are scatter vomits.

Mr Dee declared the trip a success upon arrival in the dark alongside Poole's Town Quay.


"I had several other thoughts upon arrival.(you can catch a glimpse of them here) But I didn't share them. One of them was about smart price bacon and what kind of person buys it."

After two days holed up in Poole waiting for the gale to pass, and at £48 per night, I was glad that it was time to continue the journey. There was no real plan as such, other than to head across the channel at some point when the wind might turn favourable. For now though, it was going to be easier to find Torquay than France or the Channel Islands.

It was a bit of a bash into the wind and the predicted sea state of moderate was a little more on the rough side and the predicted 12-15 knots  of wind was actually more like 18-23knots of wind. With a couple of reefs tucked in for comfort we were gunning West at a decent enough cruising pace.

After a swift power nap I set about tidying away and making Boogie Nights habitable again while Mr Dee cut up some logs in the back cabin oblivious to the transformation taking place.
Arrival drinks at a waterfront pub were called for and the kind lady brought out a tub of water for the ships dog who gulped it down extremely enthusiastically.
After a light snack we headed back to the marina office to pay up for the night, £28 this time to stay on Torquay Town Quay.
It was during "film night" as we settled down to watch a DVD that Mr Dee noticed a bit of a funny taste from the tap water and handed it to me for verification.

Yes, that's salt water coming from the fresh water tap.
The light bulb in my head came on. SHIT. I had given the dog salt water. No wonder he was looking off colour.


The following morning I pulled the boat apart looking for the reason behind the fresh water tank not only being tainted but actually full to overflowing. When we left Poole it was two  thirds full.


During this time of moderately intense activity I waved goodbye to Mr Dee who, having promised two weeks of uninterrupted holiday with me promptly fekked off back to work just five days after getting on the boat. Claiming that working on a bank holiday is entirely normal.
Was it something I said?

not sure if it was something I said: anger management


Whatever, with the fresh water system fixed, I set my sights on Guernsey and a night passage with a full moon. 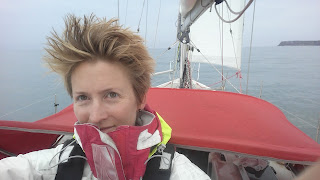 Heading into darkness alone, I sent a simple request to King Neptune.