Neptune and his gift

It has to be said that sailing has its ups and downs.

continued from blog post: Don't stop me now... and the slightly sweary addendum, a word of advice.

Sometimes things happen in quick succession that takes us from the deepest low to the highest high.

What is the point of all of this. Why am I here, messing around in this wild and dangerous sea or ocean, on my own at night. What was I thinking? I feel sick, I'm going to die. NO I'm not. I'm so tired. Just let me sleep. Wait, is that a 1000 foot container ship coming towards me, or is it going away. No, is that a fishing boat? Which way is it going? Are they just doing that to piss me off? I wish there was a moon. I wish there was less wind. I wish there was more wind coming from a different direction. Where is that salt water coming from? When was the last time I checked the keel bolts? What about the rig, does that cable look a bit loose, shit it's all coming down. No, no it's not thats just my spare forestay in its stowed position.  What the fuck is that? Oh shitting shits it's an alien. No it's a ghost ship. What the fuck is it? Oh wow, would you look at that moon, that is UHmazing. wow, wow. wow. Shit look at the size of that wave. My hands are cold. I can't feel a thing. My feet are cold, it's like walking on stumps. I'm thirsty but I probably shouldn't drink as I can't face removing my warm clothes for a wee just yet. This is the most amazing thing ever I can see the entire universe, I'm just going to lay back a while and swim in the stars. Shit where's my spare lifeline, I need to go forward and adjust that clanging thing somewhere where I can't see it, but I can bloody hear it. What is that noise? Wow look at those sparkling jelly fish, that's so amazing. Holy shit balls that water looks scary. Don't look at it. No, look at it, it's fantastic.


It's a wonder I'm not a gibbering wreck half the time.

Solo across the channel.

My thoughts were unencumbered by any worries, save for one, which was: would I make the tidal window at the other end? The fact I was the only human on board didn't bother me nor did I feel sad at being abandoned at the last port of call by someone who thought work took priority before friendship.

I had my new waterproof VHF handheld radio clipped to me.

I could see the dog happily snoozing below behind the lee-cloth.
The sea was calm and once the wind arrived there was enough of it to make progress.
For the first time in days it was coming from just the right direction.

The beautiful sunset made way for a moonlit night behind patchy cloud and Boogie Nights simply ghosted along at a steady speed, full sails set.
The moon occasionally beaming up crew from the Starship Enterprise as it broke through clouds here and there.

I watched the track on the chartplotter down below start to draw the beginning of a lovely curve as the tide took us one way then gradually back the other way.
When tiredness descended, my plan to snooze in short spells was put into action.
Music wafted through the cockpit speakers as it was magically transmitted via bluetooth from the phone that also acted as my alarm.

After nine minutes of blissful snoozing, a ghostly echo of effervescent beeping wrestled my consciousness back to reality. Taking just a moment to readjust to the dark, the horizon was scanned for signs of lights.
I flicked on the AIS radar screen and checked. Nothing coming this way.
I checked the horizon again with the binoculars, set the alarm for nine minutes and descended rapidly into another brief and blissful unconsciousness.
Repeat for three hours.

The alarm sounded for a someteenth time, I awoke, performed the all systems and visual check with robotic efficiency. I sat for a moment marvelling at the phosphorescent glow sparkling from the wake of the boat, thinking how calm and uneventful the evening was. I often speak out loud as my thoughts externalise and whether I thought it or said it aloud I couldn't say with certainty, but the words I heard in my own voice were

"wouldn't it be wonderful if there was a dolphin out here. I'd love a dolphin. You know, I'm going to have a little sleep now but if you could possibly ask one to say hello later, that would be lovely. thanks"

Set the alarm, briefly berated myself for being a twat talking to myself, zonk asleep. Out like a light, awoke with a mild snort seconds later.
Approximately 500 seconds later actually.
Reaching to switch off the alarm I realised it wasn't beeping.

A whoosh sound, followed by an other whoosh.
I checked the time, the alarm still had 30 seconds to go. Reset, pause.

Then that whoosh sound again. I'm not dreaming.
Peering out from under the spray-hood, a dark silhouette appeared like a speeding torpedo with a flash of moonlight on its shiny surface.
Another whoosh sound as the visitor breathed out, took another breath and darted alongside me, causing a flurry of sparkles and lightning streaks in the phosphorescing water.
I held my own breath not wanting to make a sound for a moment but then I realised the music was still playing through the speakers.


I'm convinced rocksteady and reggae was created with moments like these in mind. For a blissful couple of minutes the world became a living dream in slow motion as I stood and watched slack jawed.
Nothing, absolutely nothing can compare to moments like these.

The dark heightens the senses and hearing the nearby breathing as it circled Boogie Nights, creating a ring trail of light was utterly magical. But then as if on cue, the sound track changed on the stereo and the visitor simply slipped away into the darkness.

I stood gripping the metal frame of the spray hood for balance, scanning the horizon. There, twinkling off to port was the first distant sign of a ship.
I called out "goodbye!"
followed by a  quieter more reflective "thank you"

What a wonderful gift from Neptune.

The AIS radar screen was alight with signals clearly showing the tracks of the shipping ahead of us.


We emerged three hours later from the busy shipping area having slipped between the speeding ships with not a whisper of fuss. Just one single adjustment needed to show a ship my colour briefly as we slipped past one another just over half a mile apart.
The night sky gradually shifted through a colour pallet of blues until the sun rose and with it came the first scent of land soon followed by the outline of Guernsey.

Every day's a learning day.

I had hoped to be tying up on a visitor pontoon and filling in my customs declaration by 10am.
By 10.30am it was the foulest tide I've had to suffer in a long time with still 5Nm to the finish line. But it may as well have been 50.

The wind dropped to just 8kts and veered so that it was now on the nose.
The tide that was now doing a steady 5kts against us. The engine hummed away matching the tide, speed for speed. The sails gave us just an additional 0.8 of a knot to eek slowly, slowly, slowly crabbing diagonally forward. Scanning ahead I looked out for semi submerged lobster pots. The tide flow was strong enough to drag them just under the surface. Snagging one of those would ruin the day.

A best friend of many many years, known affectionately as The Doris had taken time out from work to fly out and spend the bank holiday on the Island with me. I watched her plane circle and land.
I sent a text:
"just saw you land. I may be some time. Missed tide gate. Might be a while yet. Amuse yourself or if you need a snooze, watch my AIS signal."

"yes, I'm watching you on marine traffic, thought you might have a problem, you're normally faster than that, 1.8knots isn't very fast is it..."


Tides can be right buggers sometimes.

Guernsey being the registered port for Boogie Nights has always been on the cards, right from the day I bought the boat back in 2010. I've been to Guernsey before, but not with my own boat.

August Bank holiday each year has a hill climb event for cars and motorbikes. 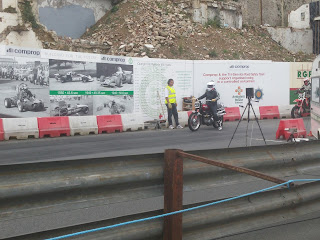 Ten quid for a full day rental, booked through the office of tourism. We rode pretty much most of the way around the island coastal road. We visited goldsmiths, pearl jewellers, a fairy grotto, an ancient burial chamber and a fascinating pottery covered chapel. http://www.visitguernsey.com/the-little-chapel


video of a little bit of the ride

Looking for a place to nullify earlier cheapskate smart price bacon disappointments, The Doris looked through the harbour tourist guide booklet and found an interestingly named place to visit for a meal out.
Les fruits de Moo. Well, we had the house special of half lobster and fillet steak medallions.
FUCK ME IT WAS AMAZING. I need say no more. Having spent seven painful hours two days earlier, dodging bright pink submerged lobster pot buoys, punctuated with sharp intakes of breath and exhaling on the words "cunting fuck!" or "Arrrgh ya bastard!" as I'd hand steer away from a buoy having spotted it at the last moment, losing vital meters gained against the raging tide, there was no way I wasn't having me some bloody lobster.

We also bumped into a fellow Haslar marina berthholder - Fuller Spirit (A Beneteau Sense 50) and its owner, the splendidly bespectacled Patrick, who keeps the boat moored just opposite Boogie Nights in Gosport. We were of course invited onboard for nibbles and social times.

As The Doris flew back to London, another friend known as El Capitano flew in to join the boat on the return to Gosport. What a lucky person I am with friends like these.

The journey out of Guernsey was lumpy but swift through the charted overfalls. The next stop was Alderney for a brief stopover.
What a lovely little place, a world away from the buzz of Portsmouth and Gosport.


I'll definitely be coming back to Alderney, it's just a few hours across the channel from Gosport.