Those flapping appendages so loved by the maritime community can be confusing at first and can continue to be confusing even when we've been "at it" for years.

So I have devised this serious guide to understanding what flags mean and when they should be flown and how to comport oneself in civilised company.For those unaquainted with sarcasm and wit, please apply your sarcasm and wit cream now. For thou shalt need lubricating to read this.

The White Ensign (Naval)
You see this on naval vessels. That's the law. It's the flag of the British Navy. Yay for the men and women who are trained to go to sea and kill others with big cannons and stop pirates from hijacking British boats near the north African and Somalian coast as they try to sail to India. (they also do other fighty stuff elsewhere with big ships and guns and things)

The White Ensign (private)
A member of the Royal Yacht Squadron Club (based on the Isle of Wight)
A supercilious group formed by the elite, for the elite. Not any old riff raff are allowed in to this tight knit club. One simply cannot ask to join. One has to be invited. This invitation is based on your public standing, your place in society, your birth right, your inherited privilege. Don't mistake this yacht for a naval vessel. You will not find Steven Seagal pretending to be a chef onboard.

This is the ONLY yacht club allowed to fly the white ensign, but must fly their club burgee at the same time, proving their status and membership of said elite club.
They look up at Naval vessels but down on all others. Hubris abounds with the white flag fliers.

The Blue Ensign
This says, I come from Britain, but I am also a member of a sailing club that is frequented by one of the Royal hangers on/freeloaders. Ergo, the club is given  a posh sounding name and blue flag status, a bit like a beach has its clean beach status. Except this clearly defines a boat as being owned or run by someone who probably votes Conservative. Avoid making eye contact in port. They are likely to want to ask you to carry their bags for them or some other menial task. (Likely retired or work as upper management or director -  very upper middle class.) They also have to fly their club burgee to prove their membership of fancy named club.They raise their flags at 0800 and lower them at 2100. These are the standard summer hours of flag raising and lowering practice. We don't need to worry about winter hours, as these boat never move at any time other than between May and August.
They look up at white flag fliers, but down on everyone else.

The Blue Ensign (defaced)
the Blue flag with a badge in it ensign - I am a citizen of the British realm of Elizabeth the 2nd, I come from Britain, but I am also a member of a sailing club that has Royal in its name or possibly at one time a Royal person came to visit and said they liked the club very much. Nothing more than that. Complete bollocks really. They even get to put the badge of the club defacing the blue flag. Bunch of w*nkers have some superiority complex. Avoid at all costs. They also are likely to be Conservative or UKIP voters. (probably middle to upper management, most likely live in a detached house in suburbia) They also have to fly their club burgee to prove their membership of slightly less fancy named club.
They might remember to lower their flag in the evening but they are likely too hungover in the morning to worry about rehoisting it, or they're off racing, so see notes on boats not flying an ensign further down
They look up at non-defaced blue flag flyers and white flag fliers, but down on red ensign flyers.


The Red Ensign
(also known as the red duster)

I am a citizen of the British realm of Elizabeth the 2nd, I come from Britain, that could be England, Wales, Northern Ireland or Scotland (or any of the many tributary islands surrounding)
The size of my flag depends on the size of my boat or the size of my ego. (Mine's huge)
Look how pretty it is as it flaps in the breeze, night and day.


"What do you mean you take your flags in at night?
I'm giving zero f*&ks about this kind of etiquette."

The red ensign is the official standard ensign to be flown by all private and merchant vessels registered in Great Britain. (likely middle class or working class workers, could be a bin man or the CEO of massive corporation. May vote Greenparty ((if they're in a yacht)), Labour, possibly Lib dem, but definitely not UKIP)
Looks across at all of the above flags other than Naval vessels flying the white and thinks "whatanarsehole"

The Red Ensign (defaced)
I'm from a part of the British empire, get over it.
VAT? What's that? Oy you! Cheap diesel tourists, gerrorf my island.
Likely to be very friendly and approachable. But possibly from a small island so caution is advised if contemplating taking friendships to midships. They're a kinky lot.
On seeing a blue flag, wonders what country that strange blue flag must be from. Might mistake a white flagged boat for Naval, in which case they're expecting Steven Seagal.

The Red Ensign (Australia)
Looks a bit like the standard British one, but with stars, that's because the Queen, our Liz, is also the head of state and she drew some pretty stars on their flag, like little regina kisses to let those down under know just how much she loves them. There's a star for each famously exported Australian celebrity, a bit like the Hollywood walk of fame.
If you see this being flown around the British Isles, chances are someone will be having a BBQ soon, you might want to make friends with them, buy them a drink. They've probably come a long way.
They don't give a flying monkey's right testicle about those other coloured flags because they're way too cool to worry about that kind of shit.

"Wait, what do you mean they have a blue one as well? You've got to be kidding me..."

The signal flag Tango was designed with those frenchies in mind. It means KEEP CLEAR OF ME

not to be mistaken with the racing penant no 3 -

which is for racing boats in class 3.

When you see the little yellow flag on a boat that's moored up, this means the boat has come from another country not part of the same group, such as arriving in Spain from Gibraltar, or arriving in America from the UK, it also means I have nothing to declare, nothing to see here, I am not over my duty free allowance, I don't have very much else on board at all really, move along now Mr and Mrs Customs ossifers.

If you see a French boat flying the Breton flag as well as the tricolor, beware. Be very ware. The Bretons are "Chuck Norris" hard. Don't mess with them. They can probably sail the legs off a cat, as well as smoke the skin off a camel whilst simultaneously giving Gallic shrugs and draining a bottle of Ricard/Rum or whatever else they fancy whilst navigating the Raz, in the dark, in a storm.


Pirate flag or jolly Roger
This is the nautical equivalent of the ubiquitous "child onboard" sign you see on people carriers stuffed with little people. Beware, boat full of little people. You may want to hoist your own and have a little pirate party. Cutlasses, water pistols and nerf guns at the ready.

Not at all taken lightly by authorities abroad. Beware of the fun police. 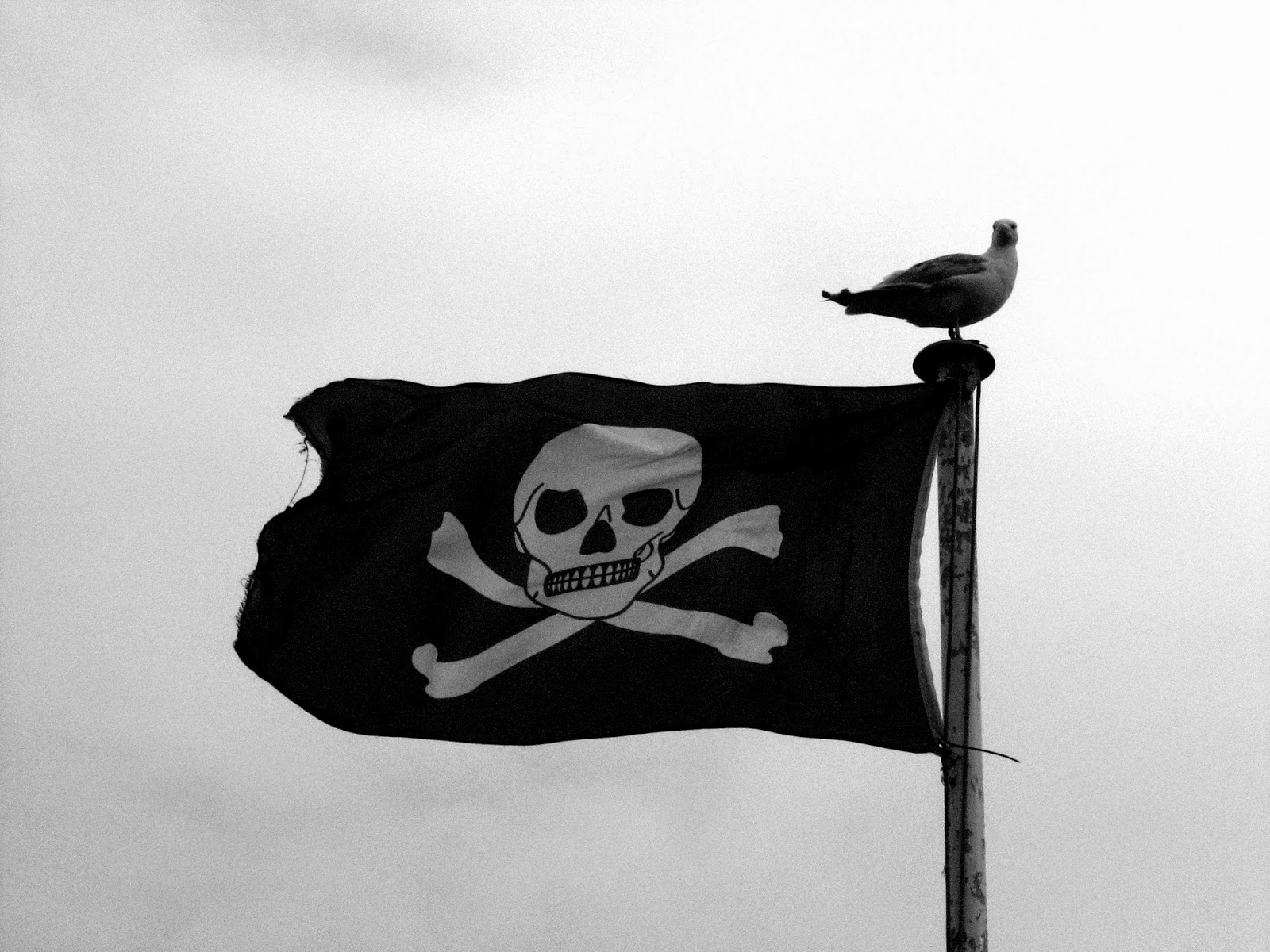 If you fly this flag as well:

You'd be an ESSEX PIRATE! 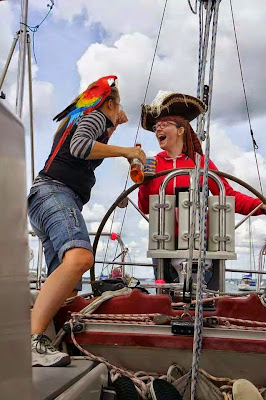 Dressing overall
This is when we string all the signal flags together and make a pretty line up to the mast and back down again. But as with all things nautical there's a correct way to do it.
Personally I prefer the method of spelling rude words and seeing if anyone spots it. (Another alternative is "The quick brown fox jumps over the lazy dog" followed by your phone number) 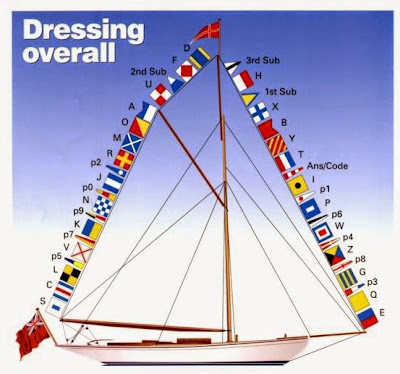 late additions:
I almost forgot to include what it means if a boat, particularly a yacht isn't flying a flag.
No Ensign could mean one of two things:
A yacht that isn't flying an ensign could be racing.
If they are flying this pennant and no ensign, as the pennant suggests, they may be kamikaze. 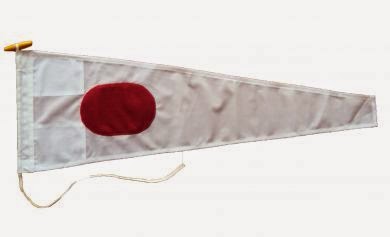 You are likely to hear: "STAAAARBOARD!" followed by "WAAATER! We have overlap! Hey! You! Scoundrel! It's our right of way." (this means: Get out of our farcking way or we'll be wearing you like a clowns nose, we're ever so slightly out of control and traveling very very fast)
Keep out of the way of racing yachts. All brains are left on the quayside to save weight. What remains closely resembles a team of large primates dressed in waterproof smocks shorts and kneepads. Possibly wearing sailing boots, but most likely wearing sebago-musto-gill-henri lloyd deck shoes. They have names like Rupert, Hugo, Sebastian, Giles, Freddie and Tarquin. They shout with posh accents.

The other kind of boat that doesn't fly an ensign is the kind where they snapped their flagpost off recently with a minor miscalculation of reverse thrust in a maneuvering situation and now have a broken stub of a flag pole jammed in the pole holder slot.
That's me that is. 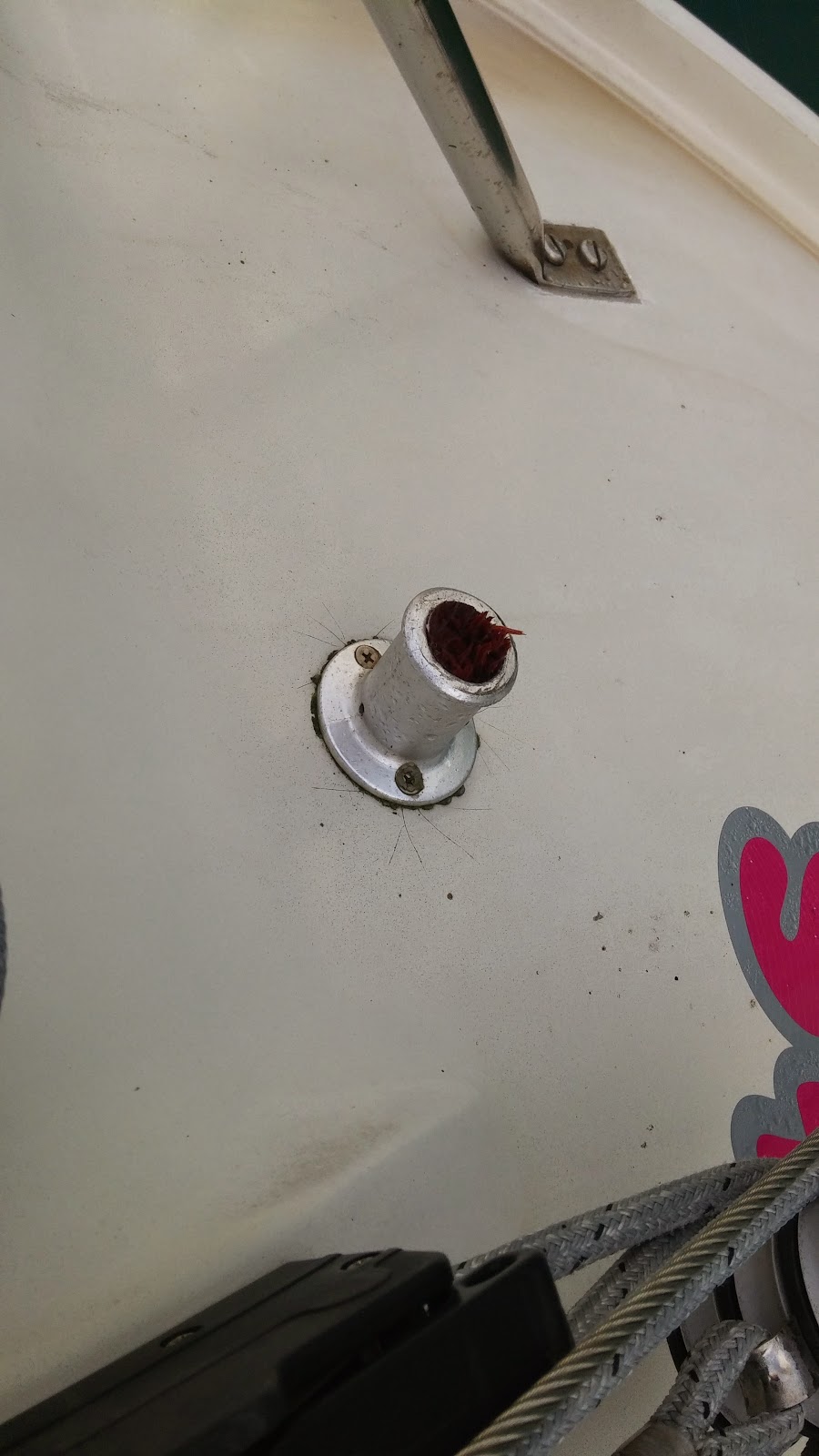 So there you have it.
In a nutshell what nautical flags are all about.