What would Thora do?

Imagine you've had a really stressful week.  (we all do at some point, that's normal)


You've worked almost round the clock for several days. The sun has been shining and you've just had to work part of your weekend as well.

There's more work still to be done with planning and reading for 9am on Monday.

Right now, it's 5pm on Saturday. You've just arrived home. Hungry. Carrying an unexpected surprise bunch of lovely flowers which had been delivered to the marina office.
You live on a boat.

What do you do?
What would Thora Hird do?

You find a spare plastic water bottle. Hack the top off with your sailing knife and do some flower arranging. 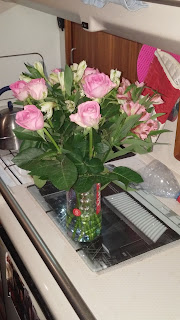 Next you find somewhere secure for them to live. The mooring spot is often so rough that a vase of flowers has no chance of surviving the right way up for very long.

With the flowers safely arranged and stowed I found myself singling up the mooring lines, autopilot took over. Thora had answered.


Before I'd really thought very much about it, I was reversing out of my mooring spot, hoisting the sail and heading off into the dusky evening out in the Solent.
"Where to; Banjo?"

I hadn't really thought that far ahead. Just a vague knowledge of which way the tides were running. 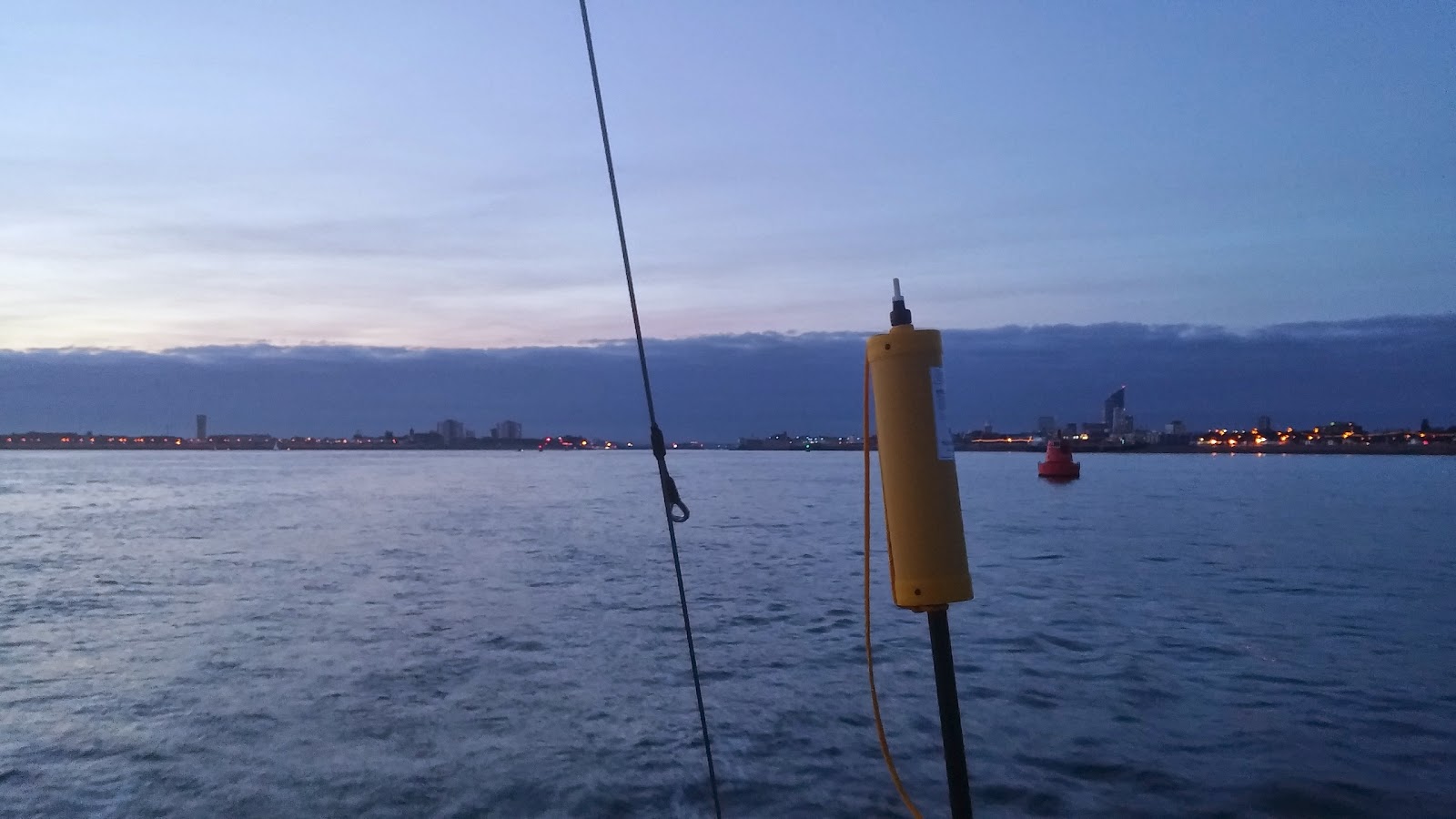 Headed east I just set the sails for best speed and off we went. Not really caring where I ended up.
I was prepared to sail all night if the mood took me.
It was a warm evening, with only lightweight wind stopper needed and the stars were out. I sat in reflective mood, looking around. Piecing the world together in the dark.
In less than an hour, the stresses of the past week were parked a few miles behind me, back on shore in Gosport.


Right now, nothing matters.
It's just me, the dog, the boat and the water surrounding us. 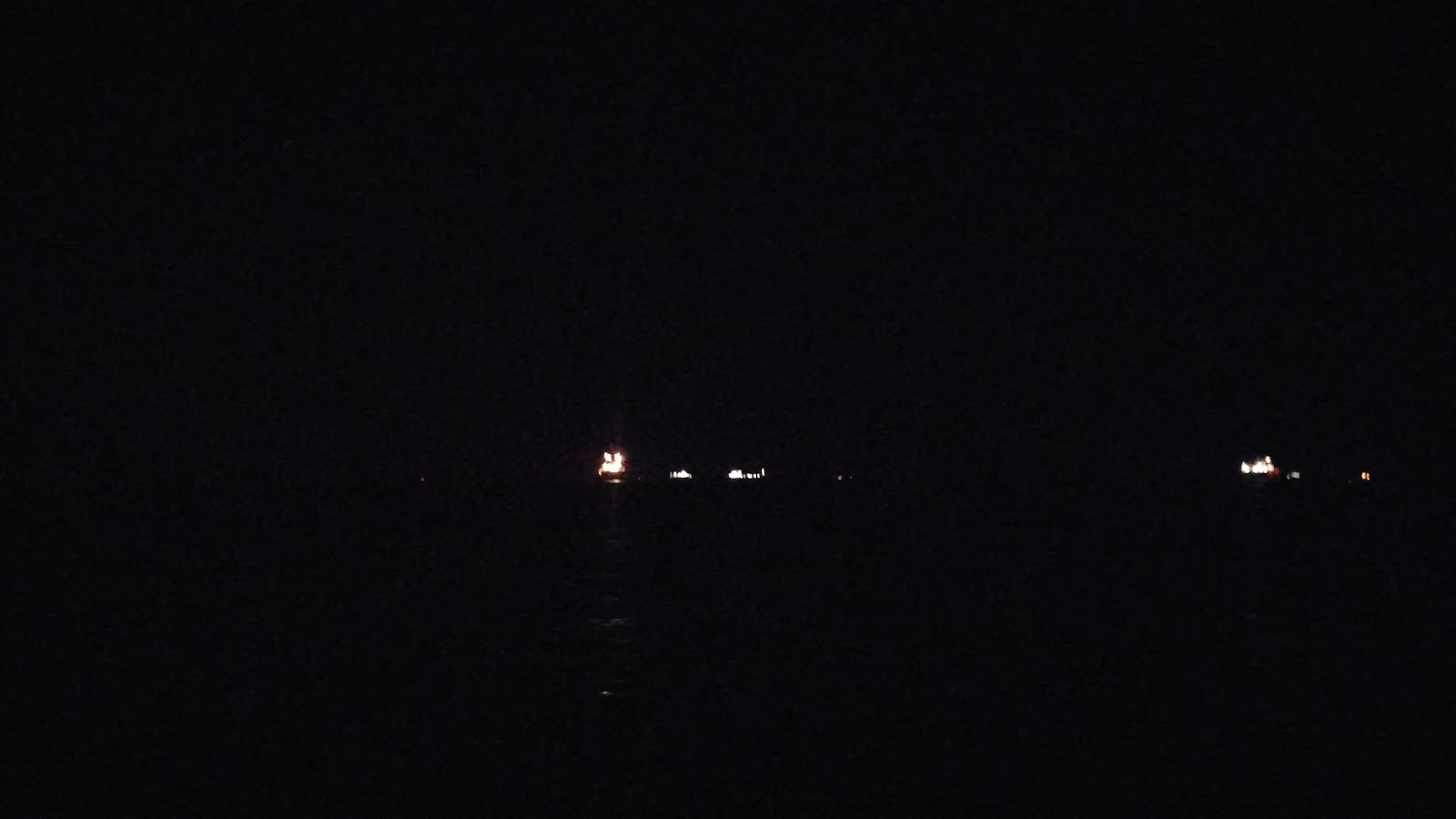 Passing ships in the night. I'm the only one out here other than commercial shipping. Remarkable for such a beautiful night. But in the Solent the majority of the boats are daytime only, or people racing and most of the racing is over until next season now.

As 11pm arrived I wondered if I should just carry on toward the dark horizon. If it had been a Thursday night then I probably would have and most likely ended up in France.
But this boat, despite being fairly rapid for its size and age, isn't a rocket, and Saturday night heading out into the channel with just 20 hours to play with meant I was consigned to staying local.


I'm itching to get away. But it will have to wait.


Chichester is a local playground and having been there twice before I decided I would head over and look at the anchorage.

Everything is different in the dark. I take it as good practice for night time navigating. Anchoring in the dark on my own is a good enough excersise.
My middle name being lucky, I never worry too much about finding a space. I dropped the main sail inside Chichester entrance, then motored around the corner, following the green buoys, to find the anchorage.
A few boats were there, but not too many.
After a quick spin round to look at distances between them and to check for unlit boats on anchor (cue a little bit of dodging a small unlit boat and torch pointing), I then pointed Boogie Nights into the gentle tidal flow,  ran forward and let fly the anchor.

Wearing my trusty black diamond head torch, it lit the dust particles in the air from the dried mud that was being vapourised as it flew off the chain.  I sat with my legs in the anchor locker, controlling the chain as it paid out, until eventually reaching the spliced on rope. I fed that out around the windlass until the rope part was just touching the water and then tied it off.
20 metres of chain should be plenty in 5 metres of water.

Lucky me, the anchor set straight away.

It was 0030 so plenty of time for an arrival drink.
I sat in the cockpit, glass (plastic) in hand and just enjoyed the moment. Music wafted out of the cockpit speakers.
I wondered briefly if I was annoying any of the neighbours, but they all seemed to be oblivious to my arrival. From what I could make out, their wash boards were all firmly in place.
There was the familiar hum of diesel heating aspirating from at least one boat nearby.

A slightly pang of jealousy that I can't afford heating hit me for a moment, and then I thought,


"don't be a twat. You already have so much. If you had diesel heating, you would find something else to be jealous about. So leave it Jayne. Leave it."

Waking the next morning revealed an utterly gorgeous day.
It was the ships dog's 10th birthday to the day.

Planning on retrieving the anchor was made easy by only a gentle breeze and little tide to worry about. Boogie Nights has an electric windlass, so back at the pointy end with my feet in the anchor locker, I can sit and control the chain as it heaps up in a pile. I winch a few metres, maybe two or three. Then I have to let the boat relax back on the chain again before winching in a bit more. Eventually I see the anchor coming up through the clear water and I know the boat is free to drift.
I have to get the anchor pulled up back into the secure slot of the roller with the securing pin in place before I can move the boat at any speed, otherwise if the anchor was still dangling it would damage the front of the boat.
Wasting no time to get this done, I move swiftly back to the cockpit and gently pull away from the now heaving popular anchorage.
I hoist the main sail super fast, in three or four minutes next to the anchorage and with the engine off again, we about turn and sail our way out of Chichester Harbour, along with lots of other boats who are going out at the same time, some of the less speedy boats were motor sailing while the winds were light.

"Unfurling the jib I quickly realise Boogie Nights is stomping along and overtaking everything around.

One yacht, a newer, faster, bigger yacht came hounding up behind.
Just as we were approaching a point in the narrow channel by a navigation buoy at the Chichester bar.
This other boat seemed intent on pushing me further and further into a collision course with the buoy.
I tried signalling to say that I needed to tack out. But no. They just pushed me down. My hand signal to them indicating I needed to tack out went childishly ignored.


"This surely isn't cricket. Or racing."

I was left with the following choices: tack into them, crash into the buoy, avoid the buoy but run aground or switch the engine on and motor around the buoy.


Anyone who knows me will know how using the engine for anything other than mooring up pains me.


"What's that noise? That is the engine, it is pushing the boat along where the usual required sailing skill and navigation etiquette have been bypassed. It pains me."


I looked over at the helms person of the offending shiny modern crotch rocket. I looked at the whites of his eyes. This was made all the more easy as the shiny cockmaster's boat just two feet away from me now. (There's more space between moored boats in the marina)

I gave him the silent look. The one that is so quiet it's deafening. Not a single word was uttered. 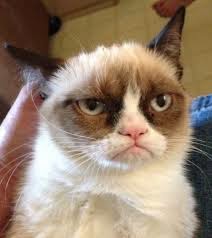 the return, non-verbal look from the offending cockmaster said


"F*&k you and your slow boat, I'm overtaking, I have a shiny boat, it's bigger than yours, look at me go. Just look at it and me. Look how impressed my young female crew is. She says I've been a bit of a wanker to you by not giving you any water, but you know it's a dog eat dog world and besides, my boat is newer, bigger and faster than yours. Did I mention how big my cock is?"

That's what the look said. I expect he will be round with flowers to apologise.  Anytime. Anytime soon. Anytime about now...

I can prepare another vase, it's no bother.

Do you know what colour flag was being flown from the arse end of this poor innocent cockmaster's boat?

I'll give you a clue.

The rest of the day went remarkably well after that.
At the end of the narrow channel, after blue flagged wanker turned right and headed straight for Portsmouth, Boogie Nights decided to go for a dance elsewhere and take the scenic route home.