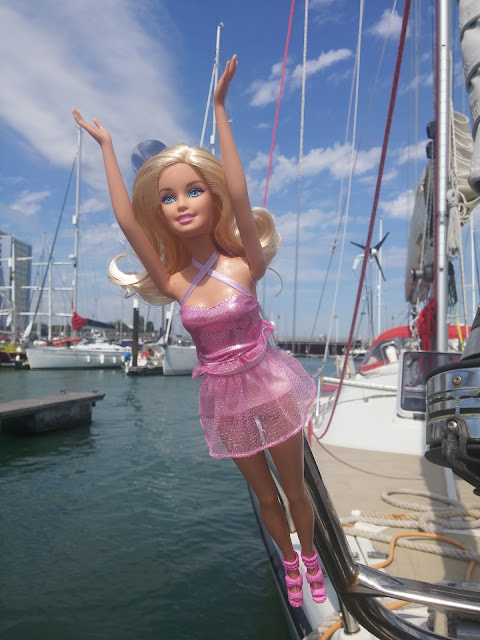 This is my first blog post so please forgive me if I ramble on a bit.

I'm expected to blog about boat life shenanigans when there's more than one person on board or when Jayne is feeling like talking in third person like a rock star.
I was brought on board in May. Though I wasn't immediately aware of my new elevated status in life when I arrived.

I started out as an unwanted child's toy in another part of the country called Notting-Ham-Shyre. After a couple of years inside a darkened cupboard without any signs of a child or ham, I was sent to slave auction rather like an Isis bride but without the threat of forced hijab/burkah or rape or sexual slavery (so not at all like an ISIS bride eh? ED) and soon found myself wrapped in brown paper and being man handled. A buyer, who for the moment remained anonymous, had been found.

I knew I was traveling but didn't know where as the packaging around me was secure. After a day of being bounced around in the back of a truck and feeling the ambient temperature rise a degree or two, I was certain that I had been diverted to a desert wasteland for ritualistic purposes and would be greeted soon by an angry multi-wived militant. (you're just a doll, shit like that doesn't happen to dolls. Nuclear incidents yes, airplane crashes yes, but militants, nah don't think so. ED)

Eventually I felt a different sort of hand caress me through the brown paper and bubble wrapping. It gave me hope. Maybe there would be a child here. It was a small hand.
I could hear noises, like seagulls crying, the sound of a bicycle being pedalled along a wooden slatted walkway, the noise of metallic chinking coming from somewhere above. I could hear the patter of tiny feet though I was sure it wasn't a child, I worried slightly that I might have been bought for a dog toy.

I heard a woman's voice grow louder and clearer as the packaging was cut away and I saw my new surroundings.
I was confused. The first thing she said was "fuck yes! f'kin bargain. Barbie bargain"
I can see I have some work to do already there with her potty mouth. She then proceeded to prod and poke my clothes and have a look to see if I was wearing any knickers.  I didn't know where to look. I felt slightly violated.
I'm not wearing any. I was never issued with any from the factory.


After the brief inspection mauling was completed I was left to myself on the kitchen counter.
I wasn't sure what to make of my surroundings.

Every surface was covered in netting or remnants of sewing paraphernalia. A hefty looking machine sat on what I could assume should be a dining table. The sofa was more of a work and storage bench.

The kitchen or galley as I've come to learn it's called was also stacked high with equipment, fabrics and occasionally food might be fitted into a tiny gap.


I was positioned by the mixer tap facing the basin and the hive of activity taking place continued apace before me.

Still unsure why I had been brought here as no children could be seen anywhere I quietly spoke to Yoda who sits on a pole nearby while Potty-Mouthed-Knicker-Hunter was preoccupied with her industry.
It turns out that I was bought as a replacement for Beach Barbie who was in the final stages of succumbing to a terrible plastic sickness. Beach Barbie had been the figure head for two years since the renaming and relaunch of this lovely vessel. She'd guided Boogie Nights through some interesting times, some wild waters and into beautiful places so I'm told.
I'd never heard of any other Barbies being upgraded from child's toy to yacht figure head, so I pressed for more information.
Wikipedia is my friend.


I think I get it, wooden boats have wooden figure heads, plastic boats have plastic ones. I'm the guardian of the vessel, warding off evil spirits as well as helping to grant safe, speedy passage. Yep, got that. Ok so when do I start?

I stood for weeks balanced by the kitchen sink.
Watching.
Waiting.
Yoda mentioned that cable ties are significant.

The ships dog demonstrated the best ways in which to pass the time.


Each time I saw a cable tie come out of the cupboard my heart skipped then sank again as it was used for something else.

After three months of balancing by the kitchen tap and many times enduring the indignity of landing on my face when the boat rocked violently, I was finally taken outside. On my way I spied a white paper shroud with an unusually large pair of feet poking out the bottom.

Now it's my turn to drive.

I felt the ratcheting tight of the cable tie around my waist as the cold steel of the pulpit wedged tighter and tighter between my shoulders and bum crease. This is what keeps me centralised apparently. I guess there will be plenty of clenching going on while I get the hang of this.