Hi there, Beach Barbie, figure head of Boogie Nights, reporting in from Treguier.

The two skippers are off enjoying themselves ashore so it falls to me again to bring you the 2nd leg report.

So before I get ahead of myself, the intrepid duo had a lovely little stop over in Kinsale.
On arrival, still salty faced and weary from our long passage they abandoned me with nary a thanks for my safe guidance and both hopped aboard a Sweden 42, where arrival drinks were drunk alongside fellow competitors into the night, the last few boats arrived, the sky started to turn from black to blue again and then they came home to their bunks.  The last dog watch was complete for a few days.

Returning the next morning, squeaky clean and fragrant from Kinsale yacht clubs facilities the two skippers reminded me why it’s good to be a non-sweating plastic doll.
I had suspected for a day or so that they had snagged the rotting carcase of some sort of marine mammal, turns out, you can get quite smelly, quite quickly, on a hot sailing passage. Who knew? Not I. I was quite worried.

During the stop over two jobs needed tackling, the VHF radio signal, or lack of, and the errant sail batten that was coiled up around Jaynes bunk, she slept with it for one night coiled like a spring over her head.


It wouldn’t take long before it “would have someones eye out” she said,

it wouldn’t be me of course, mine are painted on.

Hazel used the Electric power winch to propel Jayne toward the top of the big stick to check the aerial connection and whilst there took a good look around.
She could see the pub from there. 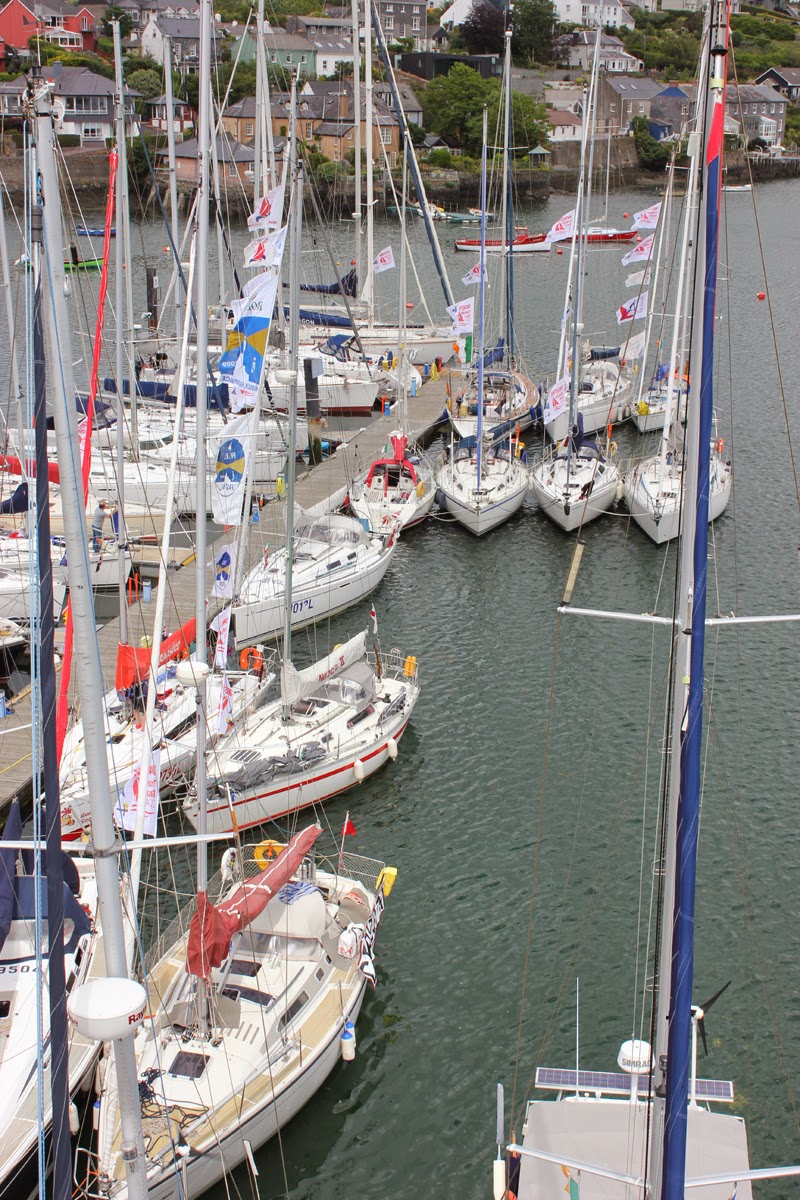 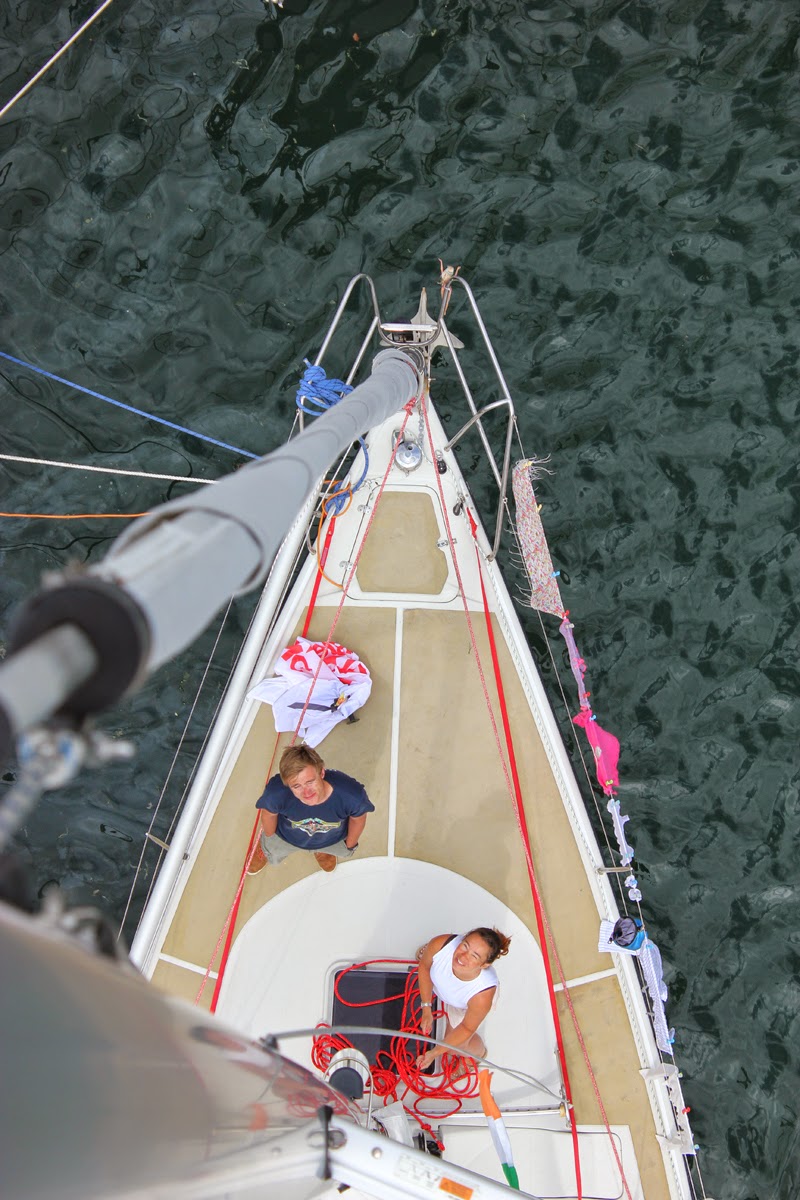 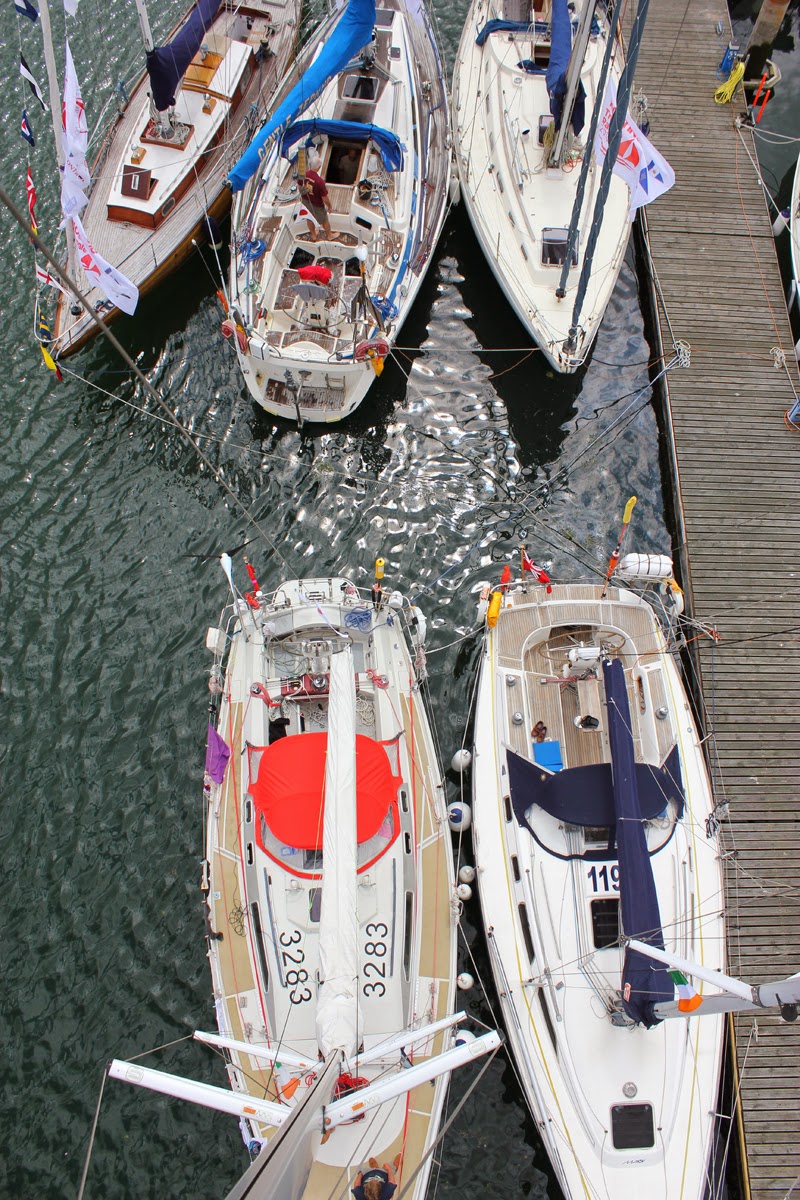 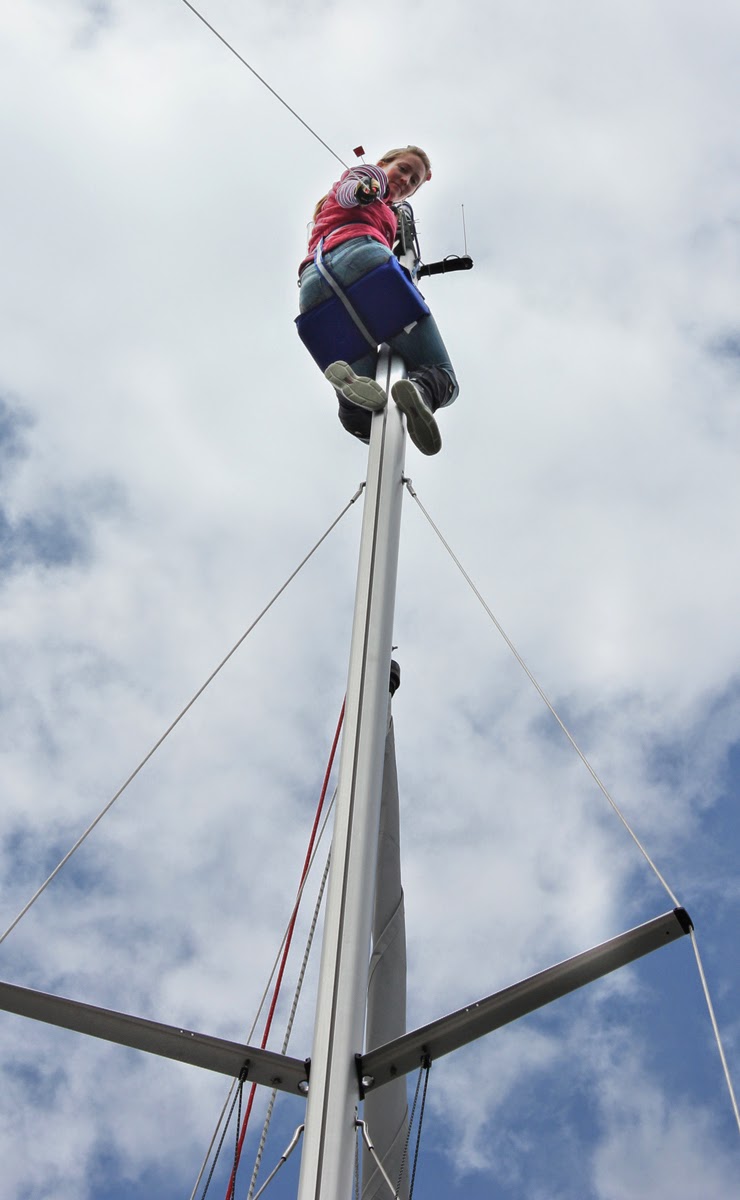 A fellow competitor jumped onboard Boogie Nights with his multimeter, they worked out it was the plug end at the bottom of the mast that needed re-soldering.
Gas soldering iron on the job (the gift that keeps on giving thanks to Jaynes Dad) and Boogie Nights was transmitting Radio 4 levels of posh voice effects once again. Jayne has a fabulously posh radio voice that completely belies her northern potty-mouthed roughness.

Next task was the batten. The long flat fibreglass batten (that helps to give the main sail its beautiful wing shape) that had popped out of its sleeve at the start of leg 1.
As I’m perpetually facing forward, I’ve never actually seen the so called “main sail”
I have seen its shadow on the water though during certain times of the day and I’d say it looks more like a giant sun dial. I can tell the time by its shadow position on the water. I'm like the Crocodile Dundee of figure heads. #beargryllsbarbie

What was needed was a stitch, or three, in the end of the batten pocket. Hazel was very pragmatic about it. But Jayne, easily upset at the thought of having to put holes in her brand new main sail had to face facts that this was the only thing that was going to stop Boogie Nights spearing any closely following yachts with its lethal high powered sail javelin. And of course ideally it should be in the sail where it helps it to hold its shape and makes us go faster.
Yoda reports to me that he felt a shift in the force around the same time Jayne put the first stitch in. We’re a little worried about her. The dark force is strong with that one. Don't let the pink fool you.

And so to the leg 2, Kinsale to Treguier race start, I was soooo excited. I was like, totally yay about the fact we have some wind forecast. It meant I wouldn’t have to put up with their constant jabbering behind me. They might have to concentrate for a little while.

Jockeying around for the race start count down Jayne whinged that Hazel was tacking a lot and it was making her tired before they had even started.
For those non sailors reading this, this means Hazel gets to play with the big round thing that makes the boat turn left and right and Jayne has to pull lots of ropes and turn lots of clicky winch handle things. Every time Hazel turns Boogie Nights this way or that, Jayne has to do a lot of rope pulling and tensioning and re-tensioning then coiling to avoid them turning into a birds nest and then she has to do it all over again. Yoda sees all from his aft facing view, strapped to the mast support.
Jayne swore that she’d get Hazel back by swapping roles next time, and Jayne would tack and gybe twice as much as needed.

When I heard my two skippers discussing “really going for it” I wasn’t sure what to expect.

They were off the line like a greased racing snake. If there was an energy drink called “well oiled stunt monkey” it would be sponsoring this boat at that time.
I couldn’t see anyone ahead of us at all. And then we were leaning. A lot. And the waves came. Kind of long rolling ones that had gotten all big from being blown all the way across the north Atlantic toward Ireland

I was like, “whoa. I’m getting it right in the face here guys!”
And they were like, whatever.
And I was like, “Hey would you mind, it was fun at first, but c’mon, I can’t breath now. I’m spending more time under the water than over it.”
And they just didn’t care. I could cry if I had tear ducts.
It did not stop.  For Hours. And Hours.

And then I was like “our father, who art in heaven, hallowed be thy name…. “
I honestly thought I was going to lose an arm or something. And my hair, I can’t even imagine what my hair must look like.

The evil, Barbie bashing pair had agreed on taking one hour turns on helm, while the other snoozed nearby. They hand steered through the first night and into the next day.
Food this time took on a very minimalist approach as I heard the Stowaways emergency gourmet food being served. Jayne managed to balance a pan on the hob long enough to warm up a Coq au van and a Venison Caserole. Hazel once again congratulated Jayne on her ability to warm something up.

Deydreamer, which is another Dehler 36 like Boogie Nights was hot on our tail for a day before eventually passing us. There was very little either Hazel or Jayne could do about it, but it did make them more determined.
Hazel had very cunningly provisioned with pork chops in honey and mustard and a fabulous potato gratin from Kinsale. Once this rocket fuel had been expertly warmed up in the oven by Jayne and both had congratulated each other on ones ability to provision well and the others ability to stand up down below on ridiculous angles of heal and warm something up, I felt the boat start to accelerate. When Jayne asked Hazel if she could put music on, we seemed to go even faster and straighter. 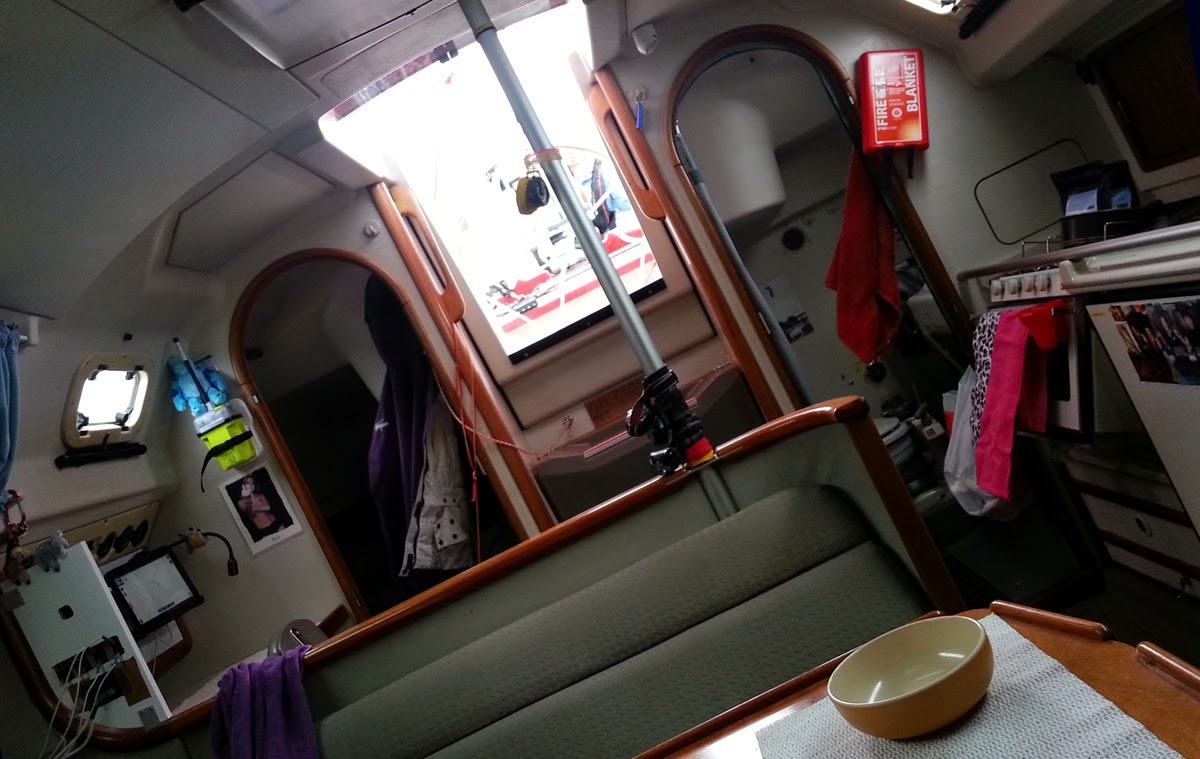 Whilst Jayne was on a roll down below, she also decided to bake a cake.

During the second evening Jayne was in her element, tweaking and re-tweaking the sails and lines, willing the boat along faster, eeking every last nth degree out of Boogie Nights as ordered by Hazel


“make us go faster, we HAVE to catch them”

Jayne sat for hour after hour transfixed by the speed readout and GPS position.
Watching the ais reported boat speeds of those ahead, 5.5kts, we maintained 6.5kts in an attempt to reach them before the finish line some 80 nautical miles away.
Hazel came up for a watch change and suggested Jayne look behind for a moment. 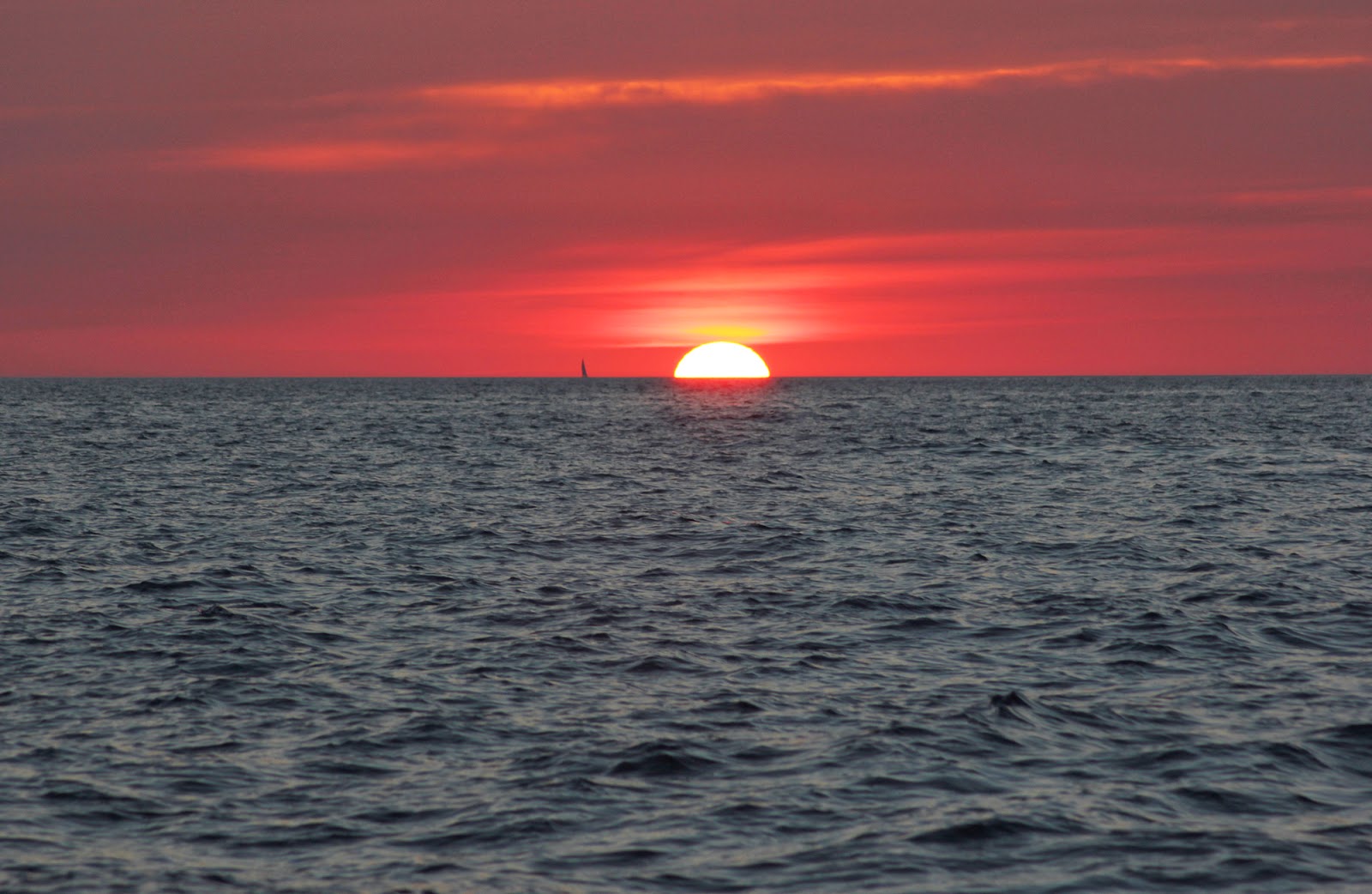 And then the night sky arrived bringing the milky way with it. Phosphorescence glittered out of the bow wave and trailed like little sparkles as Boogie Nights cut through the water.

Out of the darkness to our port side, a strange red object started to appear, sailing up over the horizon was a scarlet crescent, resembling the devils spinnaker bearing down on us.

The moon rose and lit the way to France as Brittany lights started to appear to the south.

After hauling back most of the difference on the other Dehler, they were in sight of the finish line but it was too late to change any racing results. Another 6th place for Boogie Nights.
Considering that Boogie Nights is the only boat in the entire fleet where someone actually lives on board, this is no mean feat to even be vaguely competitive. Boogie  Nights is also the only boat in the fleet with a figure head. I was looking forward to meeting some of my cloned sisters, likewise cable tied to other boats, but it seems I am alone. This makes me sad. It's a dying art this figure head business.

Using my dolphinase skills, I summoned a special guide to show the Boogie Nights team the way in through the rocks.

That’s all for now folks, one more leg to go, but before then, it’s time for a drink in the bar for my skippers. While they’re gone, I’m cleaning out the cake pan.