My two skippers Jayne and Hazel are busying themselves, Hazel in the bar socialising and Jayne catching up on university marking paperwork, so it falls to me to bring the first leg report.

After a whirlwind of activity prior to race start I was wondering if this boat would ever be ready to race, but we slipped our lines from Torquay at a few minutes after 11am on Sunday 15th June after one last nervous “proper” toilet stop for my skippers.

I wasn’t nervous at all, because I’m a plastic doll and I’m cable tied to the bow, I’ve little choice over the matter. If anyone decides to find themselves side on to Boogie Nights bow, then they have me to deal with first. And everyone knows that even in a nuclear holocaust, the plastic doll is the only thing left behind. #justsayin

Anyhoo, my invincibility aside, the ladies did their best on the line to get a good start. 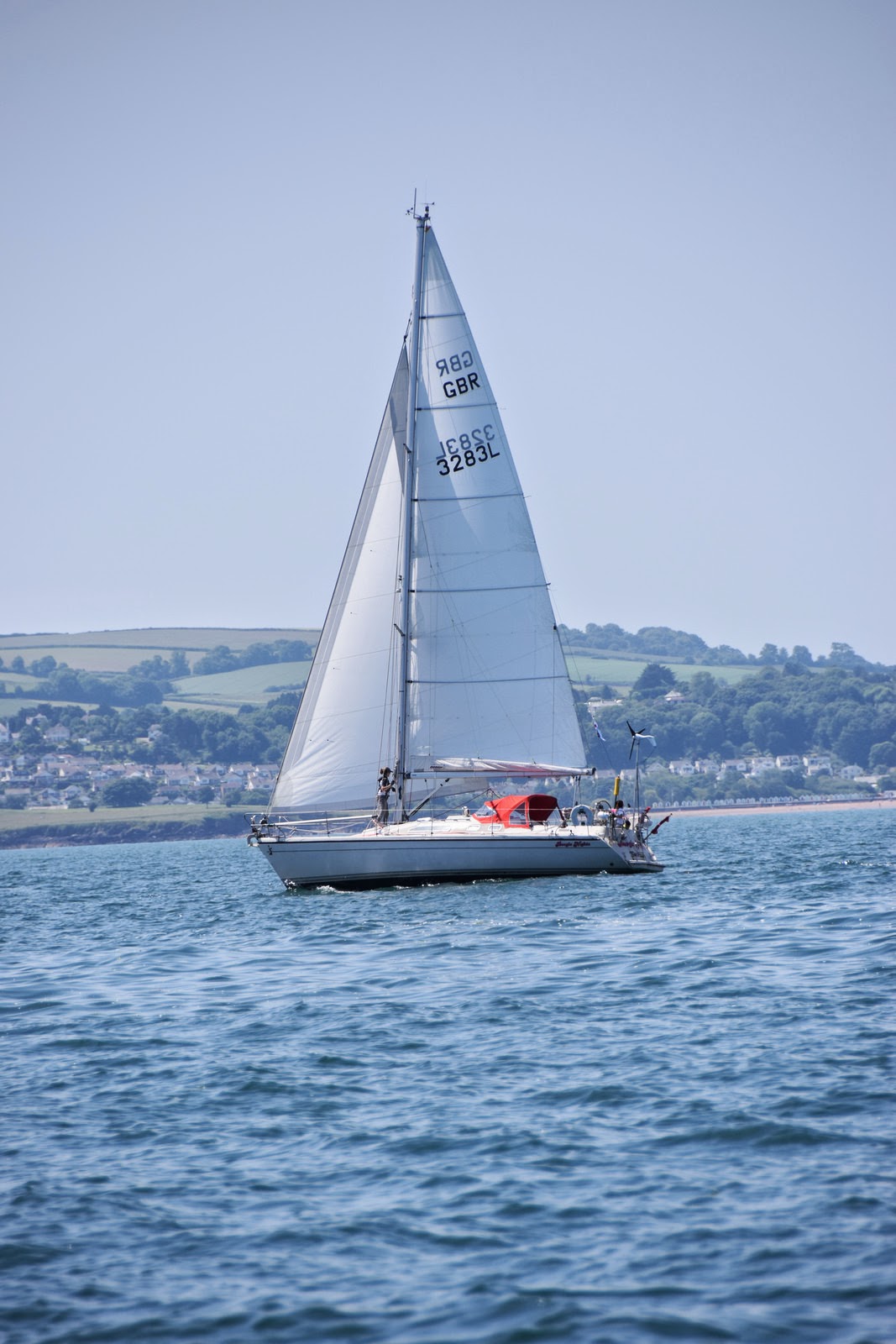 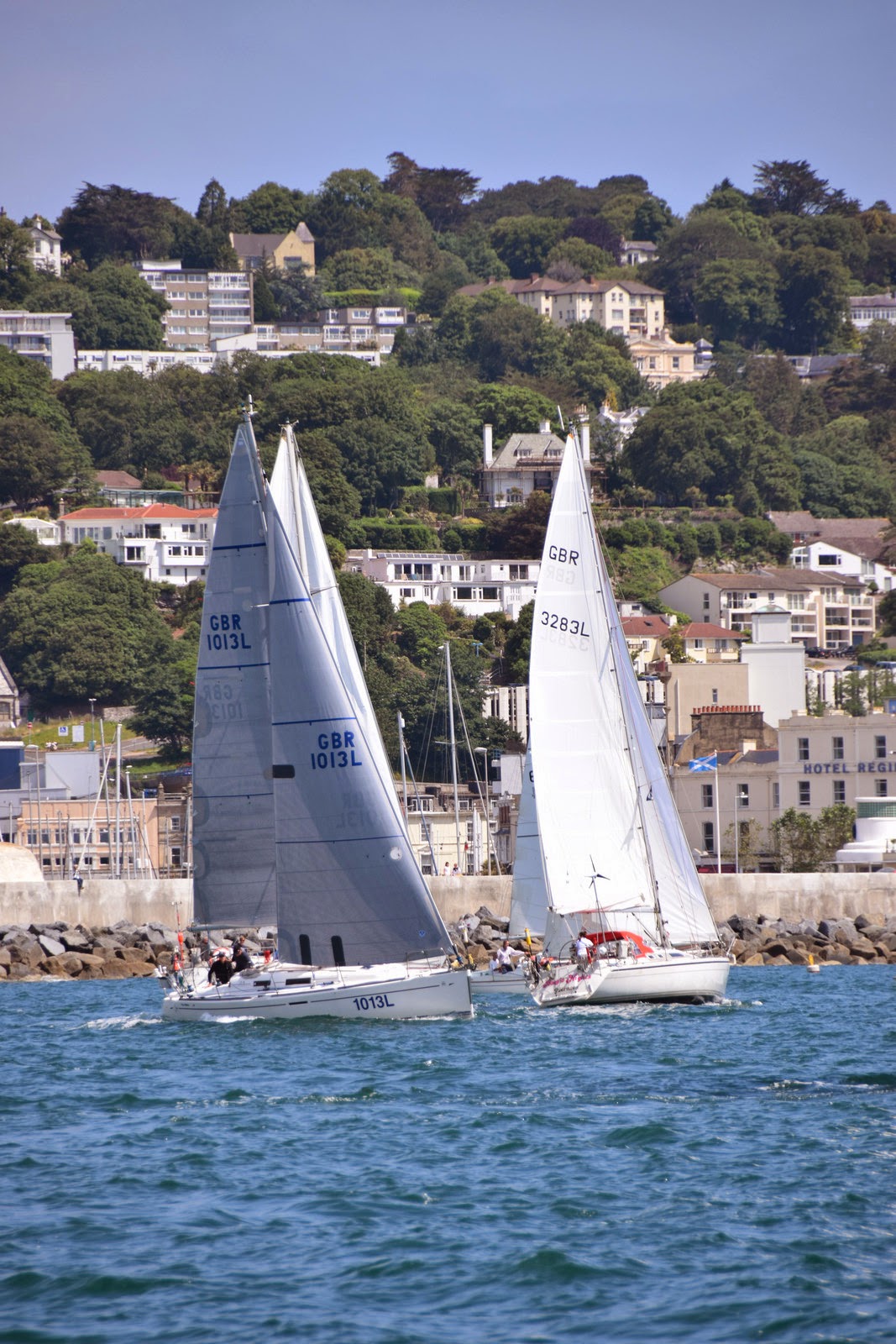 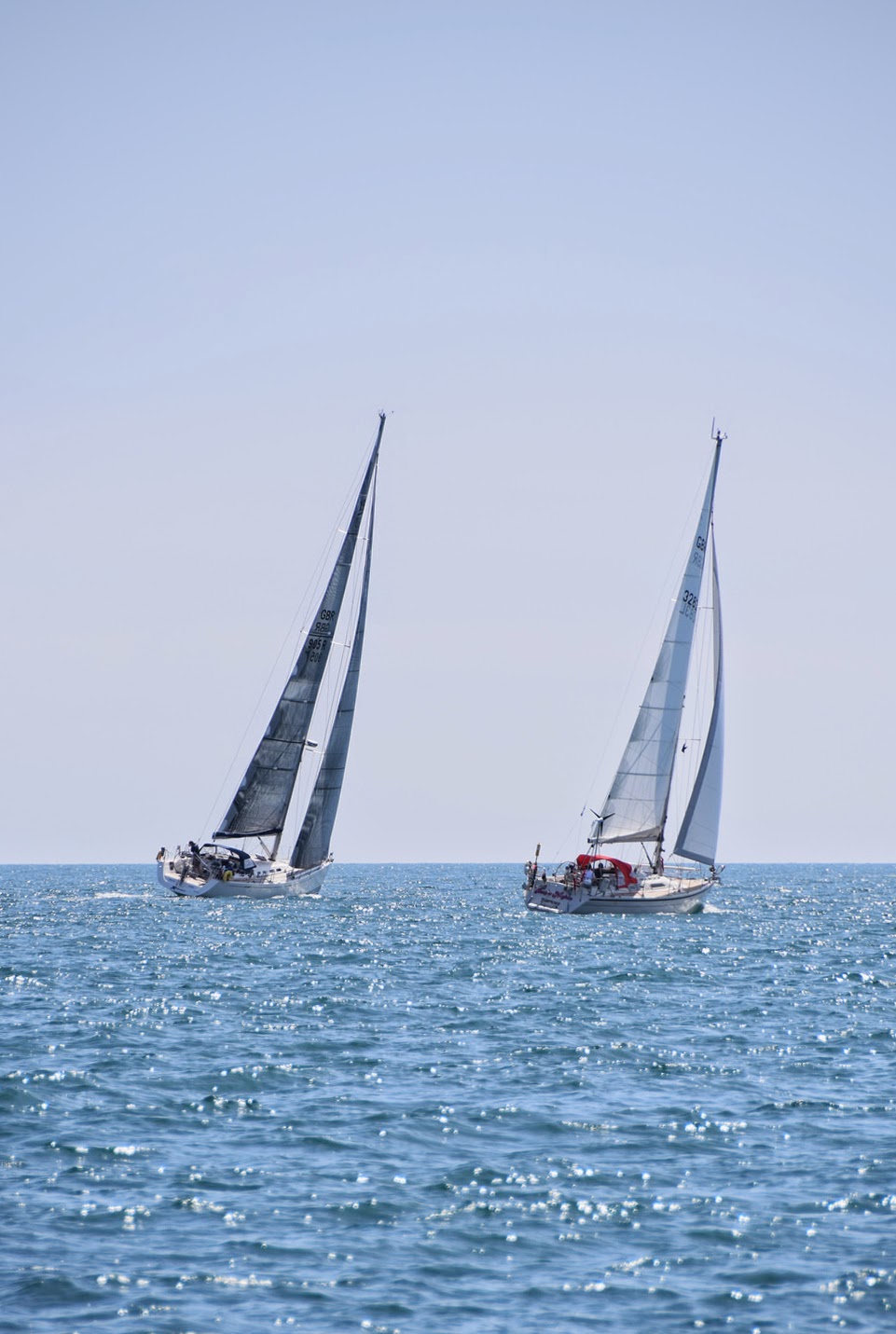 more pics of the start can be seen here, courtesy of Helen Robson , race start pics

Then shortly after the 1200 race start, potty mouthed Jayne spotted, and cursed in rapid succession at the freshly installed new  2nd batten now sticking out of the main sail (again). To avoid losing yet another sail javelin, the main was quickly partially lowered and the batten taken out before it was lost. Jayne was then cursing for not checking the Velcro, which is suspected to be at fault. The batten is now neatly coiled in the focsle. Hazel doesn’t curse. I like Hazel.

With the main quickly re-hoisted Boogie Nights tramped along at a blistering pace of 3 knots.
Yes, light wind conditions, which is good for my hair, I get a gosh darn battering when it’s windy so I don’t mind the odd bit of calm. The two skippers worked the sails hard and hand steered to maximise any gains to be had.

Dolphins were a very welcome passage bonus, during light winds they just circled and played around the boat for at least a half hour. Jayne thinks she can talk dolphin and that’s what made them come, but actually it was me, I’m the one who speaks Dolphinase. They mentioned something about a potty mouthed human clicking dolphin swear words. I shan’t repeat what it was.

Hazel had spent the last days before the race start, preparing food and freezing it. The first nights culinary delight was Chicken Tagine with couscous. Jayne, acting as sous chef did a marvellous job of warming it up. So she says.
Day passed to night and a 3 on 3 off watch kicked in, Hazel opting for 2100-0000 and Jayne 0000-0300. It was around 0200, during a brilliantly moonlit night when despite all efforts to keep the boat moving it just sat there, doing 0 knots, bobbing and sails flopping around, while a boat ghosted up in the dark from behind and cruised past. The fleet edged away as Boogie Nights floundered around and Jayne cursed (she is such a potty mouthed scamp, I should teach her the art of how to speak without using expletives, I’m a childs doll, I’m highly qualified in this field) having tried everything bar paddling to get the bus moving again. 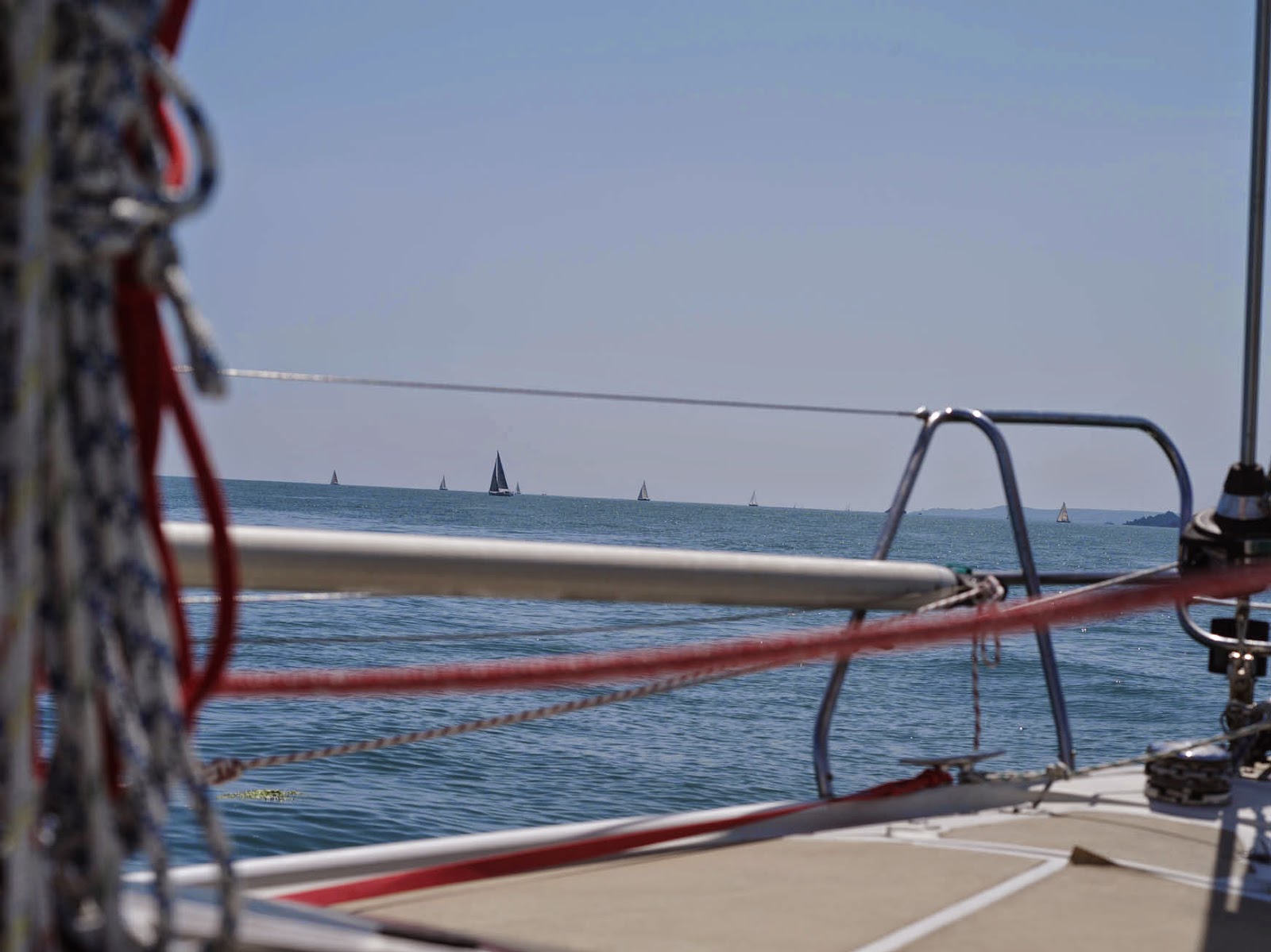 As morning arrived so did the first opportunity to fly the red white and blue.
After considerable time and effort setting up, the pretty colours finally flew, with just enough wind to drag the boat along. I like the big colourful sail, it’s the only one I actually get to look at being the mast head and all. I sometimes get to touch it. Jayne isn’t keen on me touching it. Jayne is a spoil sport.

The speed picked up, we were gunning along, with a slingshot on the eddies around Lizard point we picked up speed (Jayne, intent on making up for previous nights failings in light airs, squeaked like an old chevvy in a drive in movie when the 10knot mark over ground was cracked -  she was on helm at the time while Hazel caught up on sleep after a monster 6 hour watch) and were reeling the fleet back in. I could see them getting closer and closer, then boom.
We were becalmed again and left drifting for hours. And hours.
Lands End felt like worlds end, it was there, just over there. But seemingly never getting closer or  looking like we might round it. And of course the fleet ahead of us vanished over the horizon.

Then the evening breeze picked up after what I can only assume was a delicious rose veal with port and stilton. The chef and sous chef seemed contented, each congratulating the other for their ability to either cook, or to warm stuff up.
And off we went under white sails. A steady breeze took us round the corner, across the shipping lane and into the Irish sea.
The steady breeze of between 12 and 15knots meant Boogie Nights grooved it’s way into the Irish sea and North Atlantic at a very satisfying 7.8knot average speed.
You may wonder how I know all of these technical details, being a plastic American doll shaped figure head, well, some things are best left to the imagination, but Boogie Nights is equipped with a master Jedi  (aft facing) who is able to relay all of these things to me. I can’t tell you how. 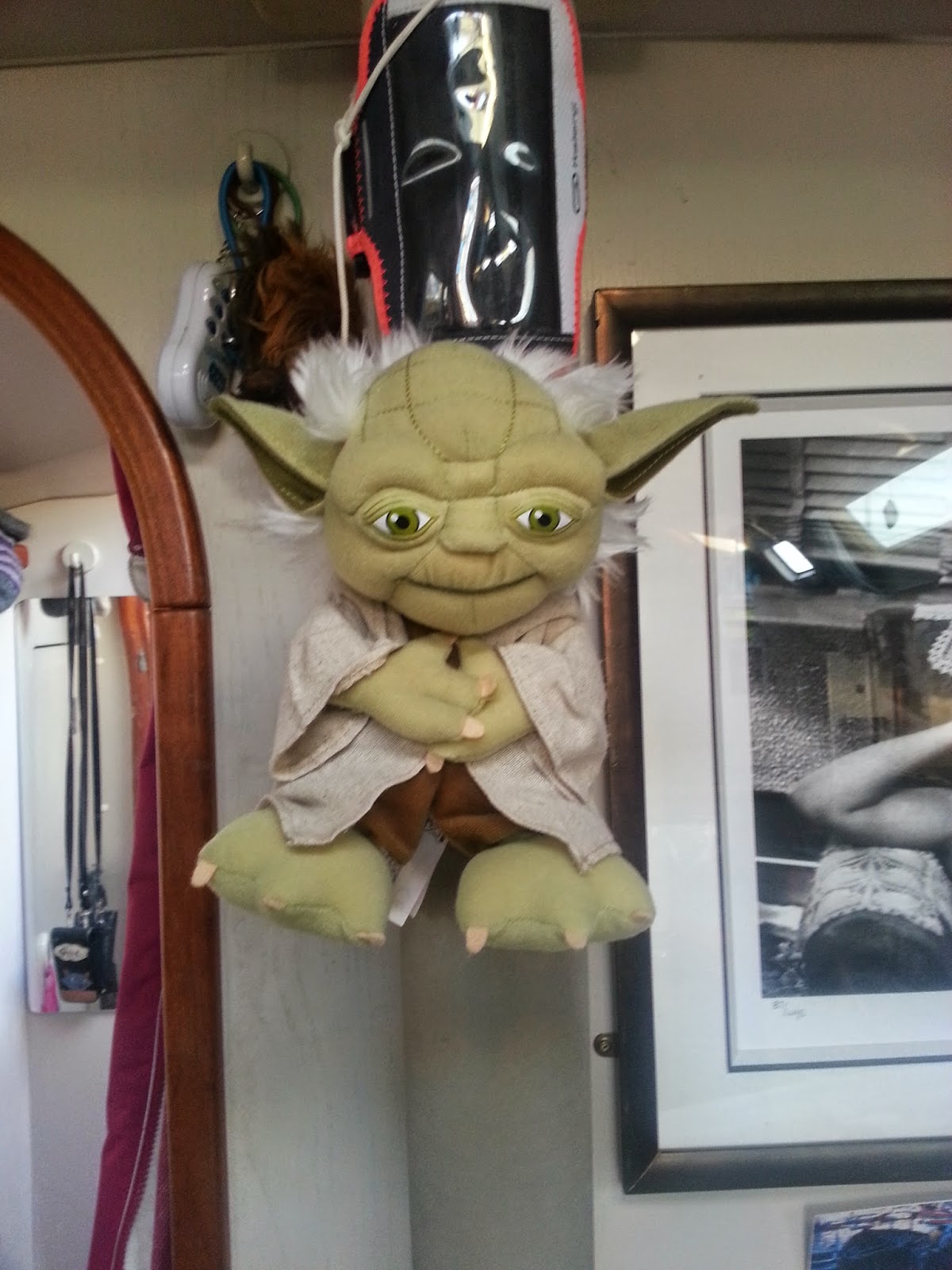 So, anyway, Jayne, being the twitchy, easily distracted wheel shy type actually opted to helm, manually.  Hazel took the opportunity to get some rest after a long spell of helming and Jayne being competitive was determined to win the fastest boat-speed-on-helm mini competition.
With constant tweaking and adjusting we managed to squeeze an 8.6knot maximum boat through the water speed out of a less than perfect point of sail.

Watching the miles tick off rapidly, Kinsale looked like it would be hosting two more in the bar by 8pm.

But then, yes, you guessed it. The wind turned to willow the whisp again. Leaving Boogie Nights and its crew almost hallucinating with tedium. They radioed to Scaramouch to ask if they could do the fandango, Hazel jogged on the spot for a while and Jayne fruitlessly scoured the horizon for signs of anyone out there.

I’m hoping for a faster passage to France in a few days, because listening to those two talking codswallop during the becalming was enough to make me want to slit my cable tie.