A mostly gastronomic delight of sailing a QUALIFYING passage for the Yachting Monthly Triangle race is now complete.


As with all plans, they never quite go as we'd like entirely. But as this was our final weekend with opportunity to cover the required distance, we had little choice but to go for it.
The previous weekends glorious sunshine and light winds we had hoped would bless us for our qualifying passage were swapped for strong winds, gale warnings, squalls, hailstorms, thunderstorms and an on the nose southerly wind all the way to Fecamp, where we were due to meet up with a whole flotilla of others who were taking part in the annual Royal Escape from Brighton.

We all have our priorities in life. I'm glad ours are complimentary.


Hazel turned up with bags of food and a moderate level of optimism that we might set sail at our predetermined time of 0000 Friday morning to catch a fast tide toward Brighton before heading south toward Fecamp.
But as thursday evening drew closer to the planned departure time, the winds built and built. In the mean time, in a sleepy over worked haze I attempted to make some semblance of a passage plan, however forgetting which way up my breton plotter works and clumsily wielding my dividers didn't immediately instill confidence in my co skipper. I tried to reassure that actually I've been doing this for years but gained no further confidence. I really must remember to switch on brain and engage thistle (1 - ref 1m18s) if I'm to ever be taken seriously as a capable sea dog.
All the while, the wind howled and the boat shook, rocked and rolled on it's pontoon berth.

So we made the choice of sane people and chose our beds, rather than a night of hellish weather on the water. I was quite thankful for the sleep. There's a rumour I don't need sleep. I do.
Being hyperactive, I'm either  go-go-go, or stop. So people rarely see me tired. I'm very lucky though, I could sleep on a washing line if I needed to.

The next morning, no sign of the weather being any less howling, we sat and waited. Quietly contemplating.
Until 1600 and finally the weather calmed enough to reverse out of our berth and head off in an approximately southerly direction on a revised passage plan.

I administered the seasickness tablets from the off. I didn't fancy a green faced repeat of our last attempt. Especially given the fantastic food Hazel had prepared and stowed in the fridge.

The first culinary delight was chicken tagine. Though, it was more a moroccan chicken dish cooked in a pyrex ovenable bowl, rather than an actual tagine. Whatever it was, it was delicious.

We started our watch pattern at 8pm. two hours on, two hours off. This seemed to work well. I took the 0000-0200 watch happily, returning for another dose of cold night air in the channel at 0400.
The saloon served as hot bunk for both of us, as it's the most comfortable place to sleep at sea. 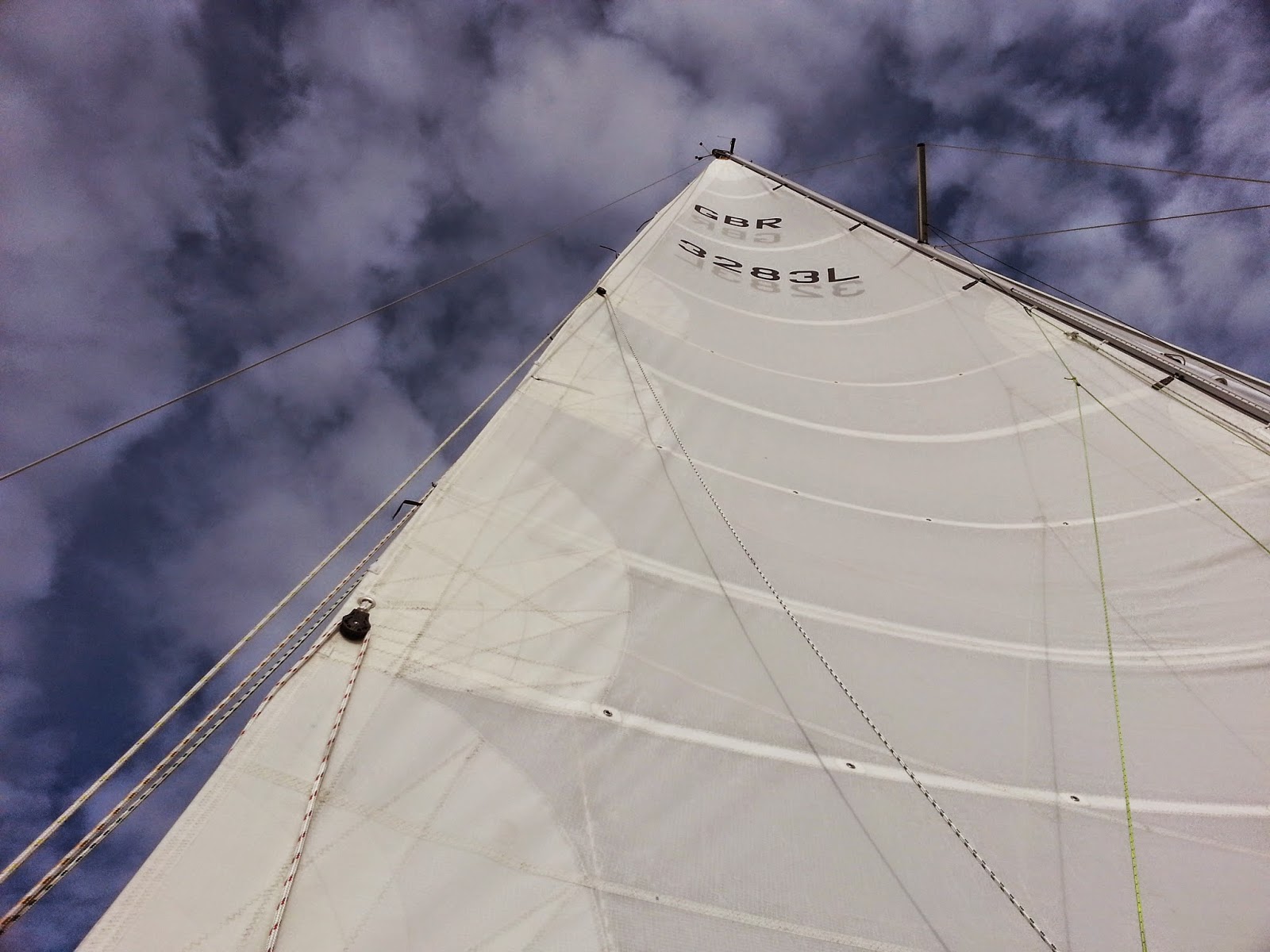 Around 20 hours after we set sail, we spotted land again. It would take a further 8 hours to reach it though and this, despite being the sunniest part of the day was torturous. We knew there was a small party going on ahead of us in Fecamp with the other crews who had taken part in the Royal Escape and we wanted to be part of it.

During the trip, we had squalls, hailstorms, thunderstorms, becalming and sunshine. So a fairly good test of team work. One of the battens decided it was a javelin and flew out of the mainsail and is now an underwater ornament. 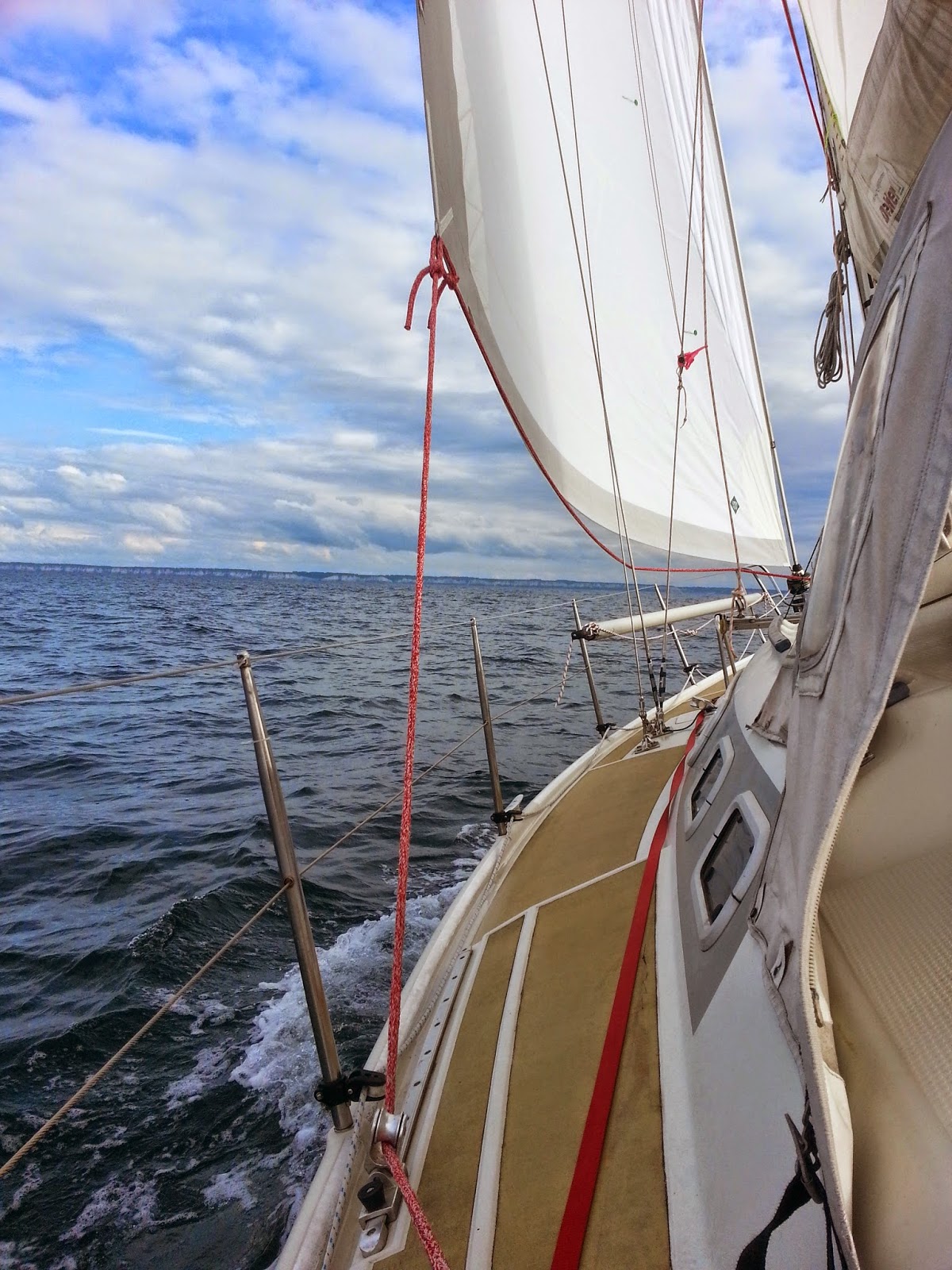 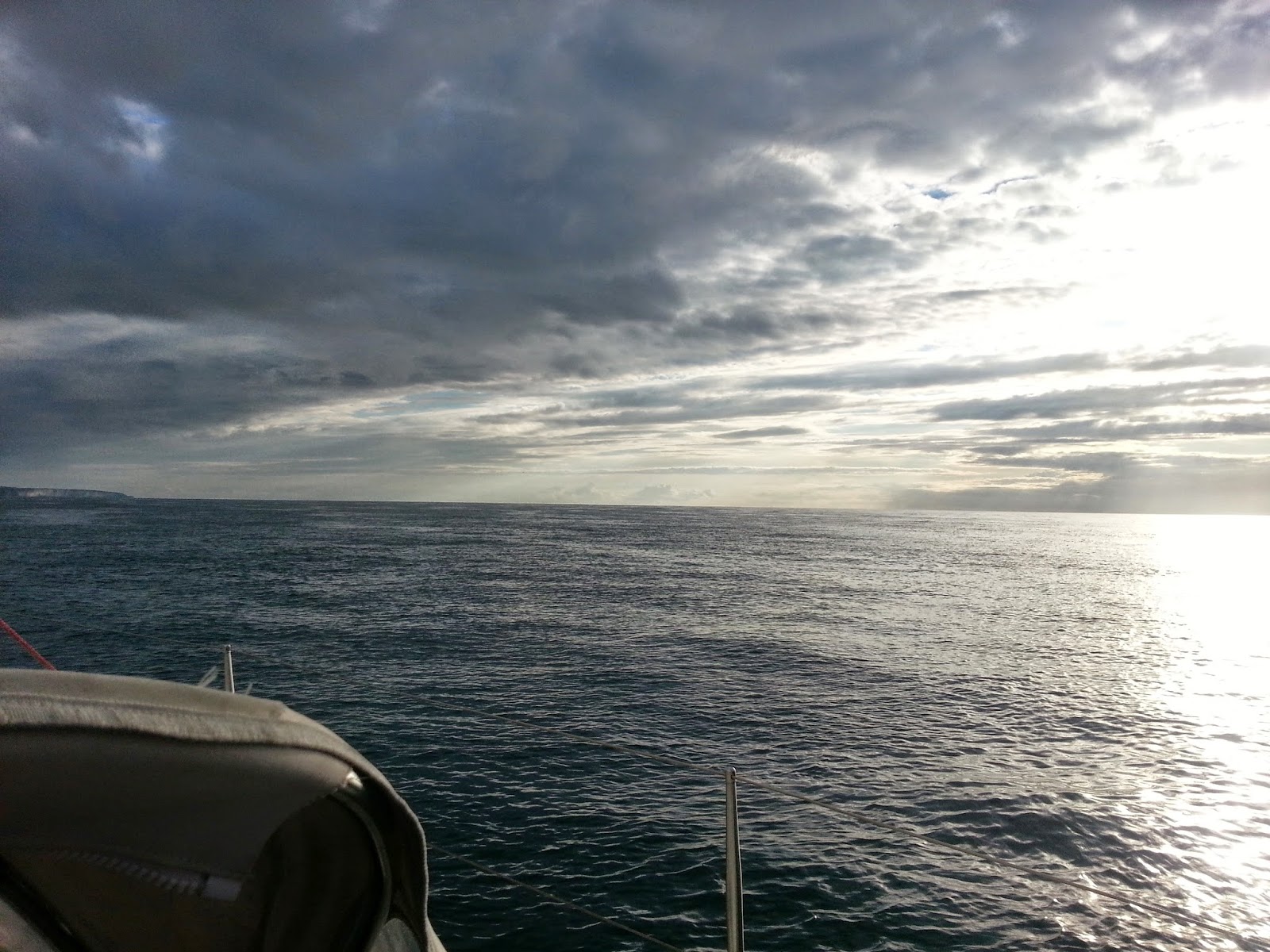 We arrived in Fecamp at 8pm British time, which gave us just enough time for cheese and wine at the yacht club where a few of the revellers from the Royal Escape were ending their night.
We waddled back to Boogie Nights around 2am, after a social gathering on another boat, called Ocean Dream. I quietly prayed that the invisible forcefield would keep me on the mini finger pontoons or bouncy springboards our boats were tied up to and not have to rely on crawling along it to stay on.

The next morning as Hazel and I caught up on much needed sleep, one of the crew from a boat we had been guest to the previous night brought round fresh bread. I can only apologise to the lovely chap who delivered it for what must have looked like a creature dragged from the bottom of the black lagoon via a hedge backwards, that greeted him.


"That was one too many dark and stormies for me I think."

A beautiful sunny day greeted us, with sausage rolls for breakast. A quick wander around the town to show me the place as it was my first visit, as well as a quick stop for pastry and the eclaire "where chocolate goes to die" was carried back for closer inspection.


Back to the passage planning and the best tide looked like a 1900 departure time from Fecamp. Oh and quel ser -fucking-prise, the wind shifted to northerly. The weather can be a right cunt sometimes.

It rained. It rained, and it didn't stop raining for twenty hours straight.

The beef bourguignon that Hazel had pre-prepared in the slow cooker at home was excellent and really kept spirits high, despite the damp. And a hot french pain au chocolate for breakfast is always a winner.
What wasn't a winner was Co-skipper almost knocking herself unconscious on a closed companionway hatch at 0400 in the morning as we were due to swap watch. She was promptly sent back below to lay down and recover. re-emerging at just after 0700 looking fragile. Just as I'd peeled off my wet clothes I was summoned back up to help put a reef in. This should have been a 5 minute job, I didn't bother with foul weather gear. Just a life jacket. But tiredness got the better of me and it took more like 15, plus a bit longer to rescue a stray spinnaker halyard that was flying loose.

"Still, I did laugh, as the rain soaked me to the skin again. What fun this boating lark is."

But, the job is jobbed. We logged 145NM (28 hours) to get down there and complete our qualification for the race and another 110NM (20 hours) for the trip back.

The Journey typically would take around 85NM  or 16 hours on average if going direct.

Now, I just have my snagging list to complete and get the boat to Torquay for June 13th.