this car, it's not just having a rest, it's dead. It has ceased to be.

for sale: a 2004 Nissan Cube, high mileage but otherwise in tip top nick. OH, But it'll need a new cylinder head gasket.
Yes my poor little pope mobile has blown a gasket. All this tripping up and down the country has finished it off. I've called a friend of a friend to come and tow it away to fix it in a cheaper part of the country. It's heading north to join my dog and the rest of my stuff in storage.
I got a quote to fix it in the south £2000. A quote from a garage I know in Derbyshire, £850.
Even including the £100 to get it towed north. It's a no brainer. 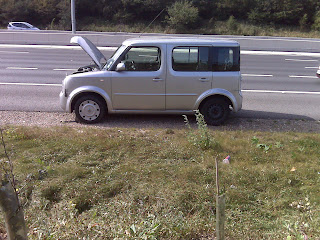