stick me on a 40 wash and be done with it


A turbulent weekend just passed by in a blur, so im going to do a slo-mo action replay to see if I can see exactly where my time went.

Saturday, I woke up to the sound of rain and pulled the duvet over my head to try and get 5 more minutes.

A busy day lay ahead and I already had a grumpy boyfriend to contend with. He's pissed off that he hardly sees me during the week and he thought once he got me out of my shared flat and into the boat we would have more time to do stuff together. WRONG! I have an extra two hours commuting to do on top of a fluctuating work flow, and last week it was on flood alert as the deadline was due. It's a good job I still love my work.

However, when it comes to weekends, I don't expect to sit and do nowt but faff and read books because I've had a busy week at work. Oh, no, deary me no. I expect to keep doing, doing, doing. I'm a bit hyperactive 'see. Unlike Mr X who feels that the weekend is for doing nothing but drinking and socialising. But mostly drinking.

So back to Saturday, Mr grumpy-pants came with me to Croydon in my borrowed works van to collect the new washing machine, it's a Christmas present from my recently departed grandad so it's a little bit special for me. It's also my last official day at the flat I shared with my best friend and I needed to shift a whole heap of shit.
It's quite emotional moving out of a flat I still like and away from an awesome friend (who is a bit like a combination of sister and husband to me) who I've shared with for at least four years and known each other since our college days back in '95. As we were sharing a piece of cake, Mr grumpy who was waiting for me outside, finally went off the deep-end and stormed off to catch a train.


That was the last I would see of him until much, [much] later.


Meanwhile, I finished loading the van, headed off to the nearest cancer research shop and donated a fairly hefty sack full of goodies. From there it was DIY shop for some gloss paint, stove paint and some firebrick cement.
Finally I headed back to the boat to do some grafting, I love painting, it's very theraputic, so I got down to the job at hand which was to prepare the cupboard space for the washing machine.

this is the before shot of the cupboard, it was like this when we got the boat last year.

In-between painting the cupboard I also repaired the broken fire bricks in the stove with cement and then sanded and painted the chimney and stove top. The chimney had suffered from water damage as the previous owners had left a rotting chimney top on that let the rain come running down the chimney sides.

It was around the time I was adding a second coat of paint to the cupboard that Mr Grumpy came home. Drunk and stinking of tobacco named after a town in the county of Wiltshire, for the purpose of this blog post I will refer to him as Mr Stinky.
He proceded to hurl abuse at me in French and I told him he stunk so he went outside to continue drinking and smoking.
I heard him climb up on the roof at one point and I was praying, praying out-loud in fact in case it made me easier to be heard by any powers that be, maybe out Doris Stokes might have been listening, for him to fall over-board. I would have laughed so hard, but he seems to have such a low centre of gravity from being so short that he's impossible to topple. Like a weeble. 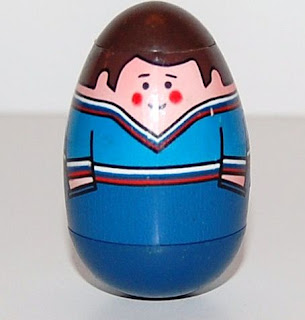 He was in bed by 8pm, snoring like a bastard after I refused his drunken amorous advances.
I finished painting the cupboard and read another chapter in "the idiots guide to being psychic"

I woke up on Sunday morning feeling a little disappointed, my previous nights spoon bending attempt had failed miserably, my attempt to contact my spirit guide had only left me with images of Rolf Harris doing a funny dance and I still had Mr Stinky to conted with, now with added hangover effect.

So, at 8.30am while I was giving that cupboard one final coat of paint, I gaveMr Stinky an ultimatum as he was heading out of the door with fags in hand, he can choose between cigarettes or me. (I have a serious hate of cigarettes since they are the main reason for my asthma I've lived with since my parents were smokers)
I fully expected to hear him packing his bags, but instead I found him looking sorry for himself sitting on the floor with the dog on his knee. He knows I'm absolutely serious and he isn't willing to call my bluff.

I haven't got time for this shit, I want to get over to a garden centre, pick up some plants and compost and get back when the paint is dry so we can put the washing machine in.
A nice little drive to Dorking and a boot full of plants later, we arrived back to an almost dry cupboard and brilliant sunshine.
Perfect.

By this time Mr Stinky was turning more human again and was capable of holding a normal conversation.
The washing machine was unloaded from the van, wheeled down to the boat and a flurry of action ensued.

we needed to remove the steps to get it in

In our haste to get it in, we forgot to remove the transport safety bolts, so it's got to come out a bit before it can be fired into action washing my dirty knickers.

I turned on the central heating to take the chill off the place and discovered the header tank was empty.
where was the water going to? I can tell you, out of a pipe at the back and into the bilges. see pic. If anyone can recommend a good Alde engineer, then please let me know. Its a slow drip but its going to take a while for this area to dry out I think.

All in all, a fairly pants weekend, so I'm going to treat myself today with a walk into Woolworths chocolate and sweet department this dinner time.
Posted by Jayne Toyne