Sometimes in life we have to take our time to reflect.

This reflection has taken a little longer than usual, due in part to being busier than bunch of shite hawks on the bins and in perhaps equal part to being rendered silent with apoplectic rage. I'll try to explain, but keep it as short as possible. It probably won't be all that short to be honest.


Last summer a good friend with an almost identical boat to  Boogie Nights asked me if I'd be interested in doing the Rolex Middle Sea Race. "Fershure", said I. "I'm up for that."

As the weeks ticked off and the October race start date approached, the crew was assembled by a trickle down effect.

First there was Clair the owner, then there was me. Then Clair found a fellow interested sailor called Emmanuel (Manu) working in the same rented office space. They hadn't sailed together before but Manu had done plenty of sea miles years before with her dad. In turn Manu suggested someone she knew from winter ski seasons, called Mary, who apparently was quite an avid sailor too. That made four of us and everything was set. Between us we have all covered many thousands of miles at sea on various types of sailing boat. Some racing, some cruising.


Four keen Corinthians off to do a lap of Sicily.

Given my university work commitment at the time I could only take the time as part of my ongoing professional practice, ie, I needed to be working on media coverage of the race. After all, this was the first all female sailing team in the living memory of the race organisers.


Race time rapidly approached and as I prepared to fly to Sardinia to help Clair and Manu sail the boat to Malta for the race start, apparently one more person had been invited, by Mary. The degrees of separation becoming ever more distant. Well, it's a small world and it turns out the 5th member of the team, called Lucy had married the winner of the 2012 Triangle Race, whom I had interviewed previously and bumped into on random occasions around the Solent area.
It's a small world. 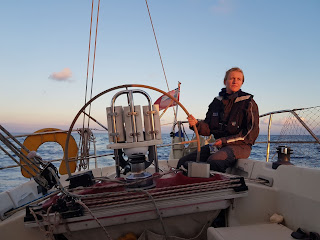 I flew out to Sardinia. pent up with stress about the university pressures I had to still cover my commitments to students. Clair and Manu were pretty chilled, with their roll up cigarettes and bikinis and I felt like a bit of a pent up stress ball next to them. Sipping my breakfast energy drink and looking a bit like a pale fat friend in quite sensible clothes.  But it would be OK. We'd head to Malta, I'd get my work done, we'd do a race, yeah.
The journey to Malta was far more relaxed than I had envisaged. So relaxed that we called in to places that I could only dream of enjoying. Yet, my head wasn't in the zone for jumping in and swimming. I was thinking of NSS scores and disenchanted students and the stress of being seen to perform for them. Dammit.

We were right there, in what can only be described as paradise. And there I was sweating over a laptop.


We eventually arrived in Malta, I jumped onto the wifi there, conducted skype tutorials and then headed off to meet Mary who had flown in.
Wow. She's a bit full on. Like, FULL FUCKING ON. But seems kinda reasonable. though, really fucking full on, and a smoker. Jeezaz. That's three smokers and one asthmatic.
OK, but we're cool. We get the new code zero out Clair had made and went for a little test sail together.
Now, this Mary, she seems like a practical person. Gets things done. But still pretty full on. A bit loud. but you know, she seems alright-ish. Maybe a bit on the overly pushy side, not the kind of person I'm used to sailing with but it'd be OK.

The Rolex races are a bit of a trumpety fanfare event and they have owner parties and crew parties and it's all a bit much really. Anyway, after a bit of a night for the owners, the next night was crew party. I was saving myself. This was gonna be epic. I'd finished all of my work for two days.
It was just one day away from race start. Lucy would be flying in during the crew party. Mary had gone to find her and show her around. I drank away the evening meeting more people than I could possibly remember, eventually landing on a 40 something foot charter boat, which had been chartered by a lovely bunch of Czech blokes.

Google translate is a fekkin marvel isn't it. Only one step away from sticking a fish in your ear.

The Deydreamer crew of five didn't really meet up to speak much until the next morning.
The morning after Manu and I had gone to bed at 7am having lightened the rum rations on the Czech boat.
It was around 8.30am that Lucy clanged into life and decided to speak loudly to Clair, who was snoozing in the saloon, about lightening the boat. I was sleeping in the saloon too. I WAS. Manu had masterfully tucked herself away in the aft cabin and closed the door. (like a pro)

There was a few jobs on the snagging list to be crossed off, But Lucy made it her mission to empty the boat. What about filling the water tank? No, we'd have bottled water. She took most of the day to rearrange the boat and remove as much as she possibly could. Including a bottle of Clair's perfume, a slinky toy and a dream catcher.
The boat is called Deydreamer. Removing the dreamcatcher is like removing the glitter ball from Boogie Nights, or Yoda for that matter.
Nursing bad heads and wanting to give Lucy a wide berth, both Manu and I headed off to the shop to get the food sorted.
Clair later snuck back into the container to retrieve her perfume and the slinky which was then hidden on-board.


The weather forecast was light, light, super light then rough as fuck.

The spray hood had been taken off. I was not amused. Being fair skinned and enjoying protection from sun and motherfuckingwaves.

As food was stowed away, it was apparent that Lucy had really made some changes to the layout of stuff on-board. So much so that Clair had to keep asking where things were. Nobody had asked for this change but there you go. Oh and guess what... make that FOUR smokers and an asthmatic.
Oh what larks ay?

Let's fast forward to the race start. We've slipped lines and heading around the corner which is about 20 minutes to the start area. I've gone forward to sweat up the main sail while Mary takes up slack, but, the reef lines had been tied in the day before and the original method of the Dehler reefing can be a bit tight. This meant a bit of jiggery pokery was needed to pull them through so we could get the main up. Lucy mistook my inability to hoist the main as ineptitude. She stomped forward in her British winter sailing boots and racing smock, beads of sweat at her temples as she barged me out of the way to hoist the main. I tried telling her it was just because the reef lines needed pulling through, but she then took the opportunity to attempt to explain to me how single line reefing works.
You can see how this is going to end right?


It's roughly mid-day. There's Clair on helm, Manu on port jib sheet, Mary on main sheet, I've been asked to cover the starboard jib sheet despite trying to live stream the event and provide any commentary and there was Lucy. Standing like fucking Nelson next to Clair, barking orders.
Who the fuck put her in charge? Nobody.
She took it upon herself to assume superiority and assumed everyone else was a complete novice or had so little experience that everything had to be explained in a condescending manner.

SO, there we are, being barked at. I'm rapidly approaching the point where I'm prepared to jump off and swim ashore. I SHIT YOU NOT. I actually thought about it.


Instead I live broadcast that "everyone's a cunt" and immediately felt a bit better.


Then it happened. You know when you have someone barking and someone trying to concentrate and then fast reactions needed. Well, another competitor tacked in front of us, we were stand on vessel still on starboard tack, but the other boat didn't react and it all got a bit contacty and scrapey and you know, bits of gelcoat were removed thanks to the other boats bow roller.

Still, we were good to continue, albeit in need of some epoxy touchups.
The next two days were torture. Both in the sense that I really didn't want to be in the same breathing space as Lucy, but also because we were running out of bottled water. The weather was turning from nothing to everything and the tracker was showing boat after boat turn around and hide in various marinas in Sicily.


The weather hadn't beaten us but the fresh water situation was getting critical. The decision to pull in rather than attempt to bash through the bad weather was taken reluctantly. Dehlers are pretty good in heavy weather.

After a night in Messina, we headed out into the straight, pointed south, back to the start along with another boat of a similar IRC rating to us. It was blowing around 50knots of breeze but as we were running with it, it was actually a lot of fun.
Well, it would have been a lot of fun if I had been able to sit outside. Instead I confined myself below, handing food out to the others, because frankly, there was still a risk of more clashes with Lucy.

The slinky was slinked sneakily when Lucy's back was turned. I sniggered like a child.

Clair jiggled the slinky out of the cockpit cabin window. We giggled. Like children who'd slipped toad spawn into grandmas best vase.

The one good thing that came out of this farce? Marina Foti had spotted us on the tracker and came to say hello while we were still moored in Sicily. I immediately liked the cut of her jib. (she arrived with fresh pastries and a flask of tea)
After linking up via facebook, when I got back to the UK, I sent her a link to the Triangle Race.

"Yes" was the reply.