I have a filthy sense of humour. I laugh at farting, shit jokes and piss taking. When I woke up to a nasty niff the other week, I was not impressed or laughing. I didn't laugh as I poked half of my pyjama'd body in through the lazarette hatch hole to have to inspect the inspection hatch of my holding tank. The only smile on my face was actually a twisted screwed up shrew face, of someone who just smelled a saucy mix of urine, faeces and trouble ahead.
The tank had a rather inflated look about it and the contents had somehow found their way out of the tank, up onto the inspection hatch lid and then overflowed, dribbling their way into the locker bilge. I looked on with a tear in my eye. So, let me first explain what was going on. For this we need a diagram and some visual references. 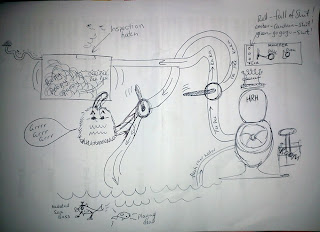 and anyone unfamiliar with a boat toilet, a sea toilet as it may be called, here is a pic to familiarise yourself with: 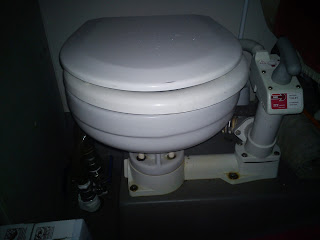 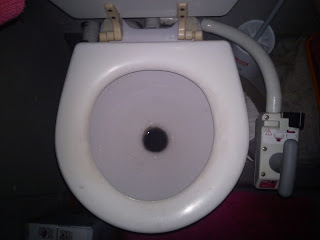 Going back to the diagram, you will see a box, this is where the toilet business goes. Held in a blue plastic tank where it awaits liberation when in an open sea situation or occasional pumping out from a marina suction facility. The exit of the tank is guarded by a muncher. A macerator, but it's an angry sounding beast, to me its a bit like a wild animal having a go at the sewage it feeds on. It spits it out, and through a valve, it goes out to sea and adds a little more sewage to the masses of mutated sea bass swimming out there. yum. On the box, there is a little pipe that vents to the outside world, up on deck. it allows the tank to breath as well as displace air volume when we add more liquid to the contents, and allows air back in when I give Muncher a go at emptying the tank. If the vent is blocked it stops the muncher emptying the tank as it cant breath, and it stops the tank from breathing, so it inflates with gasses and whatnot. its an important part of the riddle this little vent.

I didnt have to be a turd scientist to work out that the vent was blocked.
Months of condensation in the pipe had built up a sticky poo vent residue and eventually blocked completely, stopping the system from working. I only found out when the holding tank over flowed into the locker, which vented into the rest of the boat, making it smell fruity. As a stop gap while I composed myself, I thought I would switch the diverter valve to allow the toilet to empty directly outside, bypassing the holding tank altogether. It hadn't been used in years. Completely calcified, it wasn't budging. Only one thing for it. Everything would have to come apart for a thorough clean. I trolled off to the shop for a few cleaning items. 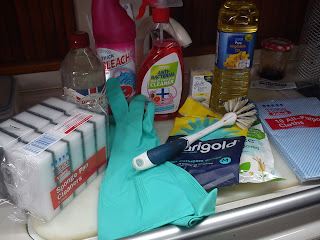 the vent pipe came off, the line was bleached, cleaned, jet washed, blockage removed. Job done. Pipe back on. The inspection hatch came off for cleaning, and while it was off I took a moment to inspect and see if I could work out why the poo gauge was on full all the time. What greeted my dewy eye was a pile of heaped up stale shite to one end of the tank, unmoved by my efforts to pump the tank empty with the muncher. semi solid, it just sat there while the liquids emptied around it, leaving the tank at half capacity at best. I needed a stick. There was only one way this bad boy was going anywhere.
In Bob Marley style, I had to Stir It Up.
Pointing a hose tentatively inside the box, I rewatered the poo, agitated it with a stick, activated the muncher, then poured more water in, agitated some more and repeated the process several times until I could see the bottom of the tank finally. This wasn't without hazard though as the splash back from the hose in the tank meant inevitably I got shit on my face. Which was nice. 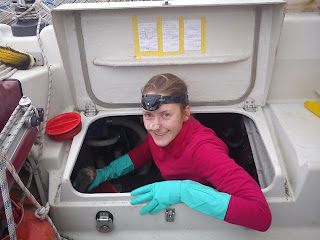 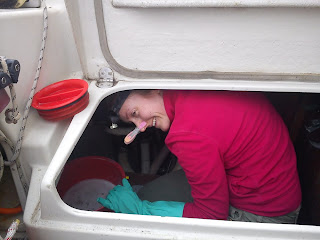 Next job. Clean the stuck valve. Taking the hoses off the valve, it unscrewed to reveal a nicely calcified interior. The scaling slid away easily, it was too easy. I filled the pipes with vinegar and watched the calcium bubble away. Putting everything together again, hoses back on. I pumped the boom box with trepidation. Yes, the valve now leaked like a spit roast prostitute. It was not a pretty sight. The plastic valve it seems had been cracked a while, but had been nicely sealed with the calcium deposits. Freshly de-scaled, it now dribbled and splurted out in a whole new direction than manufacturers intended and the toilet had to be put out of commission while I waited for the chandlers to open again. A night of pissing in a bucket. 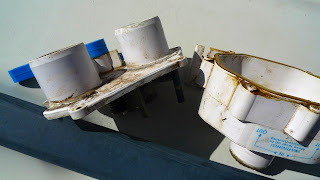 Next morning, new valve from Chandler B in Southend. Slightly different but it does the job. Except it leaks. just a tiny amount. Maybe it will bed itself in?
Posted by Fox Morgan