A weekend of two halves, one half shopping at a chandlery for bits to fix my bridle to the spinnaker pole and the other half, sewing.

While I was sewing I asked Crew member 2 to make a batter mix that I could make some pancakes with for breakfast.
No problem says Crew member 2. Digging the eggs out of the cupboard I suggested the float test just in case there was a bad one in there as they were from someones chickens in their back garden so the laid-date was a bit unknown.
One floating egg out of three, meant one egg was going to be donated to the river life.

Crew member 2 decided to try to throw it out of the window, as there was a tempest blowing outside, the crew was reluctant to go out. I strongly suggested (don't fucking dare, if you put egg on my deck I will kick your fucking lazy arse) that the crew didn't do that because it's impossible to clear the deck and pontoon.
So the crew opened the washboard and attempted to throw the egg from the companionway instead (at the same time as me saying, Don't, whatever you do... get that on the neighbours boat....).
This was a fatally flawed plan as the wind was blowing so hard, the crew miscalculated the trajectory of the rotten eggy missile and managed to Egg the neighbours boat.

the neighbour is particularly boat proud, having on several occasionas asked me to move my boat away from his as he thinks it too tight a spot to moor two boats. Afraid that I may scuff his pristine shiny boat with my old fenders slung between us as a gesture of goodwill. I've placated him by reassuring him that I keep an eye on his boat while he isn't there. I never said anything about eggs.

Crew member 2 spent 10 minutes with a hose pipe washing down boat-proud-neighbours boat.
So much for avoiding going out in the storm. 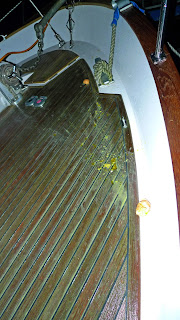 At 2am I was rudely awoken by the boat shaking violently and the sound of the rigging being torn from it's shrouds and the mast falling on the neighbours boat. I leapt out of bed to look though the forward hatch to see what was going on and saw the Jib flogging about unfurled.
Shrouds still intact. Mast still standing.
Dressed only in a furry dressing gown, wonder-woman pants and sailing boots I dashed outside.
The wind was howling at I have no idea what speed but it was probably 40-50mph gusts. It was hard to stand up. And the icy biting cold howled straight through my dressing gown. The upper parts of my body screamed from the cold, my feet, however were at least warm and dry. Thanks to Mr Henri Lloyd.
I struggled to winch in the Jib, the rampant flogging had caused it to jam, so I headed up forward to lash the last bit with a long length of bungee I had grabbed on my way out.
A very messy bundle of sail all trussed up in bungee later and I headed back down below out of the storm to relative peace. Just the fact I was still leaning at a bizarre angle for a marina berth told me it was still blowing old boots outside. 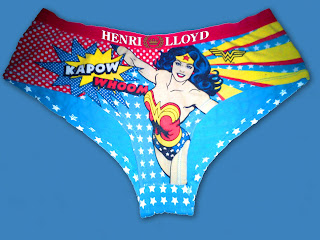