As I mentioned previously, I do rotation of clothes in my wardrobe to keep the damp down. As part of the battle against damp I also rotate which bed I use.
I installed under mattress breathable matting which has helped hugely in reducing the moisture. But, it's not completely eliminated.
So at the end of December I decamped from the forward cabin to the aft cabin. The aft cabin is a much bigger bed but perversely less room to stand.
So I prefer the other cabin.
Anyway, The back cabin has a cockpit facing lewmar opening window.
Which is nice to look out of and see the sole of the cockpit and what the weather is doing.
The bed is also low enough for the dog to jump on and off of. Which can be annoying.

This morning I was awoken by surprise, the dog jumped on me. Quite excited.
I put this off to him needing to go outside to do you-know-whats
I told him to fuck off and laid back down again.
I heard the pitter patter of a bird in the cockpit. I quickly glance out of the window to see which one it is. No sign of it.
I lay back down. Pitter patter
I look out of the window again, no sign of the bird.
Bastard fucking bird doesn't want me to sleep I cursed.

dressed and fed I opened the hatch and dropped the Banjo into the cockpit area. He shot forward, ruff up, pointing his nose to the small gas locker area under the winch bar. Tail rapidly wagging. I instinctively closed the hatch behind me as I exited the boat. I then climbed on the lazarette lid. Pocked the blanket (that I had stuffed around the gas bottle to keep the frost off) with my toe. The blanket moved, then the pitter patter of small feet as a GIANT rat legged it out of the gas locker and vanished down the back, under the false floor for the wheel.

Bugger.
That was no bird.

I poked around a bit into the steering cable area to no avail.

I then carried my plastic bag full of last nights curry to the bin and the half chewed blanket that had been around the gas bottle. I must learn NOT to leave my rubbish bag out over night like that.
Rats are keen buggers, at the slightest scent of something that may or may not be edible.

Roland is still at large. 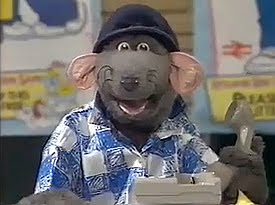