The captain is in reflective mood as we march rapidly through the first two weeks of 2018.

Life is too short to be in the company of cut purses, footpads, ner do wells, emotional voids, crap shags and right 'orrible cunts. There's no time for fucking about, but the little blue screen electronic-mitherer never lets up. So let's just release some inner "bread knife" on some shit.

Back in 2017 we counted up the female representation in popular magazine Yachting World (YW).
It was dire. Consistently utterly misrepresentative of real world sailing. It takes some effort to be that bad.


But then ironically, having just called the publisher of said mag a cunt, we found ourselves leaping to the defence of the editor as she was on the receiving end of mysogynistic venom via that popular social meeja site. Arsebook.

The cause of the venom? For daring to comment on a strange skit that was produced onboard a Volvo ocean racing boat where the Australian skipper decided it might be funny to ask what's the best way to apply sudocreme to a sore scrotum. It was a bit weird, like boys laughing at their willies at primary school. Not very funny really but, Whatever. Harvey Weinstein and #metoo was kicking off. Some armchair warrior decided they would complain under the cannily numbered new rule 69 [shnork], saying that it brought the sport into disrepute. It was all thrown out of course after a brief inquiry.
The editor of YW commented on the incident saying : 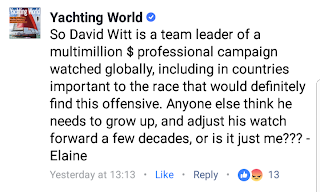 It should be noted that the sensible responses out-numbered the dickhead ones above. Some good responses from other blokes calling them idiots too. Big up to the terrific chaps who stand for equality and call out the fuckwits. We need more of you and less of this kind of nonsense above.

Meanwhile back in the real world: Captain Flashheart is still getting over having to deal with an incident where the metaphorical bread knife was wielded. A sailing event with an all women crew out trumped the spunk-trumpet of a Summer JOG race to Alderney with the emotionally needy and sulky crew mate. One of the five women on board caused this face:


Ever tried being on a 36 foot boat and had to avoid being in close proximity to a crew mate [use the word mate loosely here] when the boat is pretty much up to capacity? No? This was a new one to us too.

Between undermining the whole crew, the boat and the fitness to race, her overzealous efforts to be a total fucking control freak, who thought she had more racing experience than the rest of the crew, despite having very little in reality,  almost no people skills, no sense of humour and a bizarre need to big herself up in the media after the event. Her actions caused the boat to be short of fresh drinking water and removed useful equipment to storage, including a heavy weather jib. After a collision just after the start of the race, during which she snatched the wheel from the skipper while she barked orders and was generally a bit of a mad cunt, it just got worse from there on. We were later forced to abandon the race. Water shortage was the first reason. She states in her hastily written turgid article that the crew consisted of five women including "two highly experienced offshore racers" well she aint fucking one of 'em. The picture is also mis-captioned. That's the person in question in the pic and it's not Emmanuelle who was a sheer delight to sail with and highly professional.

We wave a breadknife in your general direction Lucinda, you shit-shark plonker.

Of course the Captain Flashheart isn't totally without guilt, she did call everyone a cunt on live broadcast video, though she blames the goading of viewers who said "what? where's the swearing? It's unlike you..." and swearing was duly delivered. When a camera is pointed at you and someone says "you're live, don't say fuck bugger or cunt." What's your response to that?
yeah. Sorry about that nice skipper lady who doesn't swear. Please accept this sincere apology. You definitely weren't all cunts, just the one really. See above.

Just go and dare say that the youtube channel sailing la vagabond is a bit vacuous and generally a bit meh, we dare ya! You're highly likely get hit with some fanboy wet tissues, and lots of comments saying that it was just "jealousy" or "bitterness" making you say hurty things. Despite very clearly stating it was based on journalistic integrity. You wouldn't get that kind of BS if you were a bearded manly looking journo. No, women are always jealous of other people, especially women, because, duh, we're only judged on how we look... because you know, bikinis...

. wait... there's more?
and that whole thing about jealousy and bitterness went a bit like this...

Back in the real world one last time...

The captain was asked a few weeks back, "how come you're single?" by a friend who seemed genuinely curious, well, friend, if you're reading this is why...
You know how sometimes you can't believe a date was actually as bad as you remembered it, so you  wait 18 months and give it another try after being e-mithered repeatedly? [at least once every six weeks, counts as mithering right?]  Yeah, don't. It really is fucking rubbish. You'll sit and listen to an entire night of whinging and complaining about other people, the weather and somehow not shake a bread knife when they comment dismissively "oh I could never live on a boat" then endure the most  utter pish, I'll spare you the details.

(It was like a cross between Uncle Rico from Napoleon Dynamite and Ted & Annie from the opening scene in the film Bridesmaids followed by the Ace Ventura in the shower scene.)

Crap dates, I'm waving a bread knife at you. No more saying yes when the word should be NO.


That sums up this summing up of a Bread Knifey 2017 and not very auspicious start to 2018.
It can only get better, the expectations are entirely reasonable.
If anyone else has anything that makes them feel a little bit "stabby" please share it.
Captain Flashheart feels better already for releasing the pent up swears.

Disclaimer: it should be noted that at no point was anyone harmed physically during this blog post, no physical harm is intended to anyone involved and the metaphorical weaponisation of words is merely a simile to the old phrase, to have a sharp tongue.