A freshly un-silenced Disco Barbie tells the story of the third and final leg of the 2016 Triangle Race.

As we finally tied up alongside James Jermain's shiny new Catamaran, Echo on 23rd June in Torquay, 11 days after our departure and with an additional 950Nm on the trip meter, there was no jubilation, no elation, no high fives or fist pumps. There was just a nagging feeling of failure and a distinct whiff of diesel.

But I'm getting ahead of myself.

The departure out of Treguier river was beautiful with sunshine and a very gentle breeze. 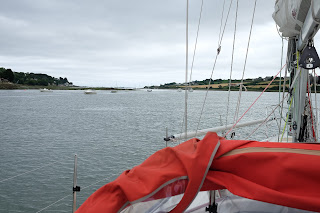 The start was serene and the fleet wafted gracefully around the place and eventually over the start line.
The wind was once again on the nose, but this time less of it. 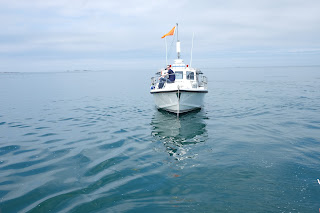 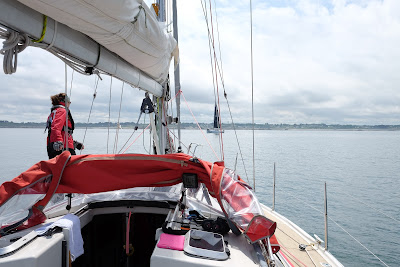 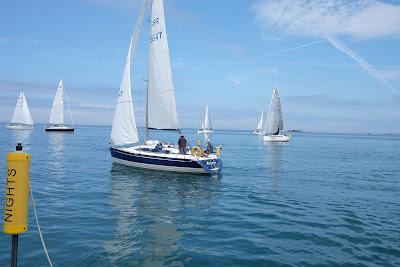 The usual 10 or 12 hours of rapid crossing from Treguier to Torquay (it's about 90 nautical miles) would be replaced with a slow upwind battle.
Boogie Nights isn't equipped for light wind sailing particularly. We don't have a fancy light airs code wotsitorother and we don't have a massive genoa (no never met her)
The "ickle" jib, called Mistress Jibima we've got is perfect for bashing away across the Irish sea into 30 knots of snot, but not so perfect for this wind seeking. 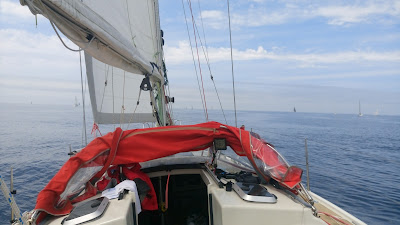 After an expensive beasting across the Irish sea, a crash gybe run to France, we now faced an upwind, no wind run across the channel back to Torquay.

It was slow, infuriating and soul sapping. I nearly cut my own cable tie. I was ready to give up. Except I float and I'd probably get picked up again as they slowly drifted by.

We had a magnicifent sunset though and this kept spirits up for a while.


60 miles and 24 hours into the crossing we hit a wind hole. We parked up for a little while. I felt a bit daft really holding my arms in the air like I'm commanded to do, when we weren't actually moving.


It was with deep sighs and resignation of defeat that the engine was turned on. The time taken and then my plastic, slightly sun damaged nose was pointed directly at Torquay, 30 miles away. Arms aloft. Come on, there's at least drinks to be had in port.

Jayne went for a lay down but couldn't sleep despite looking tired.
So she got up and gave Sue a much needed break after both had had a sleepless night before. At the very moment they swapped places, the engine note dipped dramatically. Then recovered.
Jayne nursed the throttle for the next hour as the calm sea state allowed good straight line progress.

As we neared Torbay, the dolphins jumped and played all around us. I'd sent out a message (the ability to speak dolphin is passed from one figure head to the next thankfully) for them to come and cheer Jayne up. Dolphins always make her smile.

And then the engine finally conked out.

Sue jumped on the helm and got us moving under sail again while Jayne started to pull things apart around the engine. Pulling out the box of engine spares and making ready with spare diesel.
Priming the engine has always been difficult.


Sue exclaimed it was perhaps the best bit of sailing in two weeks!
Meanwhile, Jayne had her sleeves rolled up, filters were swapped out, dodgy looking diesel was bled off from the diesel trap and all air voids filled with the use of a jug and a steady hand.
The engine refused to prime though and the lift pump wasn't lifting the fuel into the system as it should.

After exhausting all of her knowledge at the time, Jayne phoned through to race control to see if anyone had a rib or motorboat that could be used for a tow.
A fellow Triangleur was press ganged into helping.
After a scrappy and ill thought out plan of entry which involved a quick lesson for a long keeler on how fin keels work, and some fraught moments that had me ready to sacrifice myself to fend us off a sea wall, we somehow ended up tied up alongside Echo, James Jermain's new catamaran.

That was the end of the Triangle 2016 for Boogie Nights. Jayne sat in the cockpit, head in hands utterly dejected, silently and mentally adding up the financial and emotional cost of the past two weeks and wondering how to explain quitting a race.

But then the news broke for the final results and it couldn't have been better.
Amylou, a Maxi 1100 won the race overall. Having beaten off out-out race boats, the Maxi had raced with all the comforts of home which include scatter cushions, an electric kettle, a cockpit table and cockpit tent as well as hosting several drinks parties at each of the stop overs.


But the good news kept coming. Katisha, the Contessa 32, which is the oldest and lowest IRC rated boat in the fleet for several race editions, won their category on each of the legs, giving them the treble and third in the race overall with an X-34 called eXehibitionist sandwiched in 2nd overall.

This is what the triangle race is all about.

for a full list of the results you can look here: http://results.rtyc.org/triangle/results/tri2016os.html

Despite the battering, despite the cost of the repairs, Boogie Nights will be back for another Triangle Race.

Meanwhile, there's a small matter of a sorting that engine out...

thanks to the two narrators of the story, Disco Barbie and Grace O'Mally.


and the two skippers for taking good care of the boat and themselves in difficult conditions.