JT: Lovely weekend for it

JT: are you going anywhere nice?

Pogo Lady: I think we'll head over to the pub in Cowes, and you?

JT: Oh we're going to head out of here, turn left then right a bit and just keep going until we get bored and come back again. See you at the bar on Sunday? 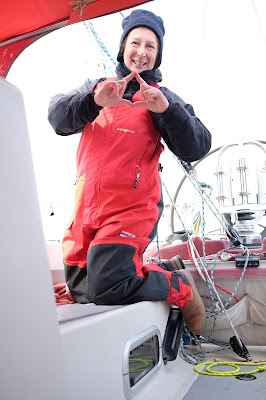 It's that time of year already when we have to knuckle down and do a few things to prepare for the first race of the year, actually my only planned race of the year (there will be more, I just don't plan far ahead normally)

Sue popped round to say hello and since the weather looked quite nice, we thought it a good time to nip out to get our qualifying passage done for the Yachting Monthly Triangle race. It's not particularly arduous at only 125 miles, but finding the time where we were both available and the weather was ok is the hard part.

Before we set off Sue made a rough passage plan and then suggested we use the log to...

no wait, Sue, the thing is, erm, my log, well, I haven't got one. Well, I have, but it's at Raymarine still. I forgot to get it back from them. Yeah I know, I took it there last October...


so we had to tot up the miles the modern old fashioned way using GPS lat and long, join the dots and measure it on a paper chart.

And for once I was chef rather than heater-upper. Though, I'm no Steven Seagal... 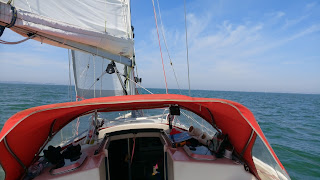 erm, wait a moment... A word from the figure head

"I don't know what's going on here, but at no point above do I see any mention of being honked at by that massive ship leaving the Solent because dipstick one and dipstick two failed to make their intentions clear to the myopic watch of the bridge, like pointing me at the fort wasn't clear enough, or Sue having a minor moment of "ee bygum there's a lotta ships in the dark" and I've seen no mention of the chaos of re-entry to Portsmouth Harbour (3 ferries coming in, 1 ferry going out, two tugs escorting a ship in, a floating dredging raft blocking half the entrance and Jayne almost breaking a sweat)

No mention of Sue being passive aggressive to the little tupperware that completely pretended Boogie Nights wasn't there and no mention of the scrappy mooring offered by Jaynes cack-handed berthing skills.

but hey, I won't mention it if you don't ay ladies? You don't mind me calling you both dipsticks do you?