Todays work is the start of the worst pig I think I've had to think about doing on the boat so far.
The P-bracket, the bit thats holds the propeller shaft, became wobbly after the long journey from Gibraltar. Although I'd guess that it had already had some rudimentary repairs along the way to keep it going and for the previous owners, or the owners before them to avoid having to do this dirty and fiddly job.

The way that the P-bracket is mounted was a bit of a mystery as it was shrouded in a large grey fibreglass/epoxy mound. This we (between my dad and I) decided to attack with chisels rather than a grinder to keep the dust down.

It's a messy job whichever way to attack it. 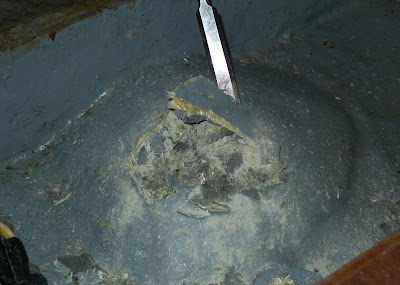 Several hours of chiseling revealed a large bolt running through the top side and a chink of light shining through the hollow p-bracket.
Which wasn't the best news, but I was hardly surprised.

As I was peeling back the glass fibre wrap externally I removed several areas of filler, including the area which revealed a long crack in the p-bracket weld.

So now I need to remove the shaft, remove the p-bracket, get it repaired/welded and then find someone to re-fit and re-glass it for me. Or, do-it-my-fucking-self as it would seem to be the only option these days.
Can't seem to find anyone who wants to work and those who do are too busy.